Well fancy seeing you here! The Retirement Home are bouncing back like Alan Partridge – so not that successfully – but we do at least occupy a playoff place at this early-ish stage of the season. With only over 35s at our disposal and a £3m debt owed, the odds are we will only be heading one way in this table. Then again, we’ve defied the odds before…

Start as you mean to go on – a home defeat to Crewe puts our qualification from the Windscreen Shield in doubt but with a win already in the bank, we go through anyway. Yippee.

It’s a right old ding dong at Craven Cottage. We turn around a 1-0 deficit thanks to Mick Quinn but then it looks like Fulham nick a point late on. They don’t thanks to the Micker, who is a man reborn this season. He completes his hat-trick with 10 minutes to go and celebrates by drinking the Thames one pint at a time.

How do you follow that? You lose at home to Macclesfield. Sigh.

And Watford. Even 10 men have too much for us. We’re a disgrace sometimes.

Third Division opposition in the FA Cup is more our scene. Scunthorpe, who we seem to play multiple times every season, are brushed aside. Nearly a full house for it too, goodness knows why. Round 2 will see us head to Chesterfield.

There is brief hope at St Andrews at Letchkov pulls us level but as usual it unravels in spectacular fashion. Snodin sees red, we lose 4-1 and Ray Wilkins gets one over us.

More humiliation follows, this time at home to Stoke. I liked it when we were 5th.

Some hope is restored with a convincing win at Crewe. Quinn is at it again and we celebrate with another signing…

I’ve always said we need some divine intervention so what’s better than a man of the cloth. Gavin Peacock, I hope you’ve still got it. 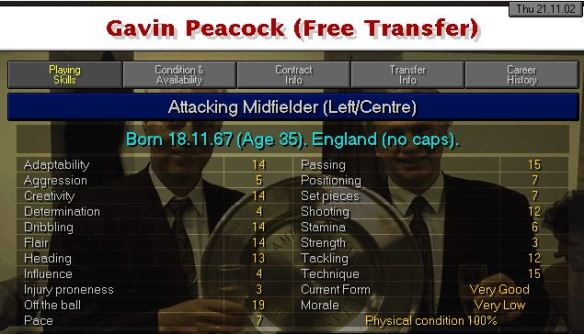 Unfortunately for us, Gianfranco Zola has also still got it. Waddle gets us off to the ideal start but the little Italian levels it up. A point will do.

We’re having a decent run in the Shield, something I don’t normally care about but we need all the money we can get. We edge past Darlingon thanks to Quinn.

Copy and paste. Quinn is the difference against Chesterfield as we book a place in the third round. At home to Man Utd please.

We get Reading away. Great. Still, we get manager of the months, which I will happily exchange for £3m.

A good win follows against Hartlepool, Chamberlain getting us off and running before Quinn continues his great run.

Blackpool absolutely smash us to bits. David Gower gets two.

We’re hanging on against Preston who are leading the division. Just when it looks like we’ve earned a great point, Andy Booth ruins it. I hate you Andy Booth.

All Castellon want for Christmas is my back up right back to be their manager. He has a clause so I can’t stop him. Goodbye.

Dover make the trip to the elderly on Boxing Day and leave with nothing. Hardly anybody turns out.

I’d love John Barnes to get sacked and I make a great speech about it just before we head out at Carrow Road to face his Norwich side. It actually works too, with Quinn, Roland and the Waddler running wild and hopefully edging Barnesy closer to a free transfer.

That FA Cup tie sends us to Reading. It’s not a great draw for us in any way and although Quinn briefly gives us hope at 2-1, we lose 3-1 and that’s that.

We’ll always have the Shield. You know who scores twice and the Bulgarian legend also gets on the scoresheet to earn us an area semi final.

Another fruitless trip to the south coast – on the plus side, Di Canio is of age now and his contract expires in the summer. Just don’t renew, you daft racist.

Nottingham Forest have a front two of Dean Sturridge and Pierre van Hooijdonk. Mick Quinn outscores them both and it’s a good win.

For once we back that up with another decent win, save for a sweaty last 4 minutes. Back in the top 6!

We finish the update away to Brucey’s Tranmere. They are seeking a second successive promotion under the Geordie Guardiola and when they take the lead, I assume that’s it for us. We’ve found another level though and Chamberlain equalises. A tremendous effort.

Here’s your hero and mine, 22 goal Mick Quinn. You’ll notice I had to re-sign him at the start of this season, his contract expired and we couldn’t afford what he wanted. However once a freebie he lowered his demands and he came crawling back – sometimes his back gives out. I’m so glad he did though.

Quinn has scored 63 goals for us at Second Division level. It’s his level. Still, things are all quite positive and next week could top it off. Is a return to Division One on the cards? Will that pesky debt be cleared? Will Quinn earn an England callup? See you next week.