The notion of a Super League killing football is very real but you have to say, it makes things quite interesting in the entirely fictional world of CM9798. King Of the Rooks is back to continue the madness whilst managing PSG. Catch up with part 1 here.

Hello and welcome back to the UEFA Super League 1997 where we are trying to see if a well assembled PSG side can have better luck than their future money bags selves in a league that never happened. We left part one having made some reasonably smart signings (so I thought):

For us, Muoio was an absolute gamble, that hasn’t paid off. We closed out October in 6th place, ten points behind the leaders Man Utd, no seems to be able to find a better answer than 4-4-2 it would seem.

We open our winter account by piling on the misery for table proper’s Celtic. The only annoyance is losing Ode and Dhorasoo to injuries inside 10 minutes.

England fail to qualify klaxon!!! No doubt Eileen saw it coming. Meanwhile Chelsea pay £9m for Richie Humphreys. The transfer market is going bonkers. Our boy Leroy Jetson helps us to another 5-goal haul but Man Utd maintain the 10 point gap…it is getting tasty.

Petry dishes out enough saves in the Feyenoord goal but under the microscope it was a poor performance from the Dutch as we as we secure another 5-goal haul on the bounce thanks to Denzil and the space cowboy.

We can’t capitalise on a rare slip up from Man Utd as they lose 3-1 to PSV. We can only manage to draw with Sporting despite 15 shots. The gap is down to 9 points. Outside of Man Utd it’s as tight as Mike Ashley on transfer deadline day: 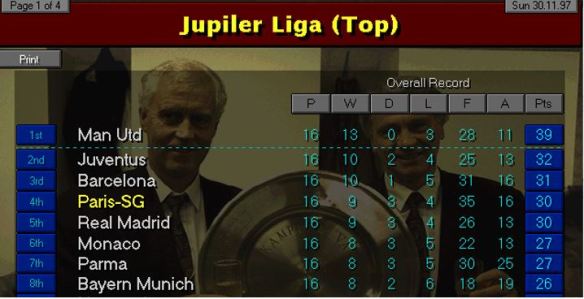 At this stage, its probably worth sharing the modification we’ve made to the ultimate formation after the few defeats, we experienced:

The toon arrive in town and future Newcastle boy Domi breaks hearts whilst only a defiant Shaka Flip-Flop prevents another 5 goal haul.

A Jamie Redknapp inspired Monaco knock us out of the UEFA Super League-League Cup after extra-time as the space cowboy gets his marching orders. This doesn’t bode well for our chances of chasing down Man Utd’s 7 point lead.

Back to the glory of the Sky Sports UEFA Super League and 11 minutes in a pretty Roche challenge sets us up for a difficult afternoon, but the Kaisers kuk their penalty up and we fight on.

The gap to Utd is down to 5 points.

We turn up at the Santiago Bernabeu without the inspirational space cowboy, Domi suspended and Roche suspended. Leroy goes off early but my oh my, that was the performance of the season…

The gap to Man United is down to just 3 points.

Next up we have a crunch game vs. 3rd placed Juventus who have matched us point for point, goal for goal so far and probably have the strongest squad in the league. After making the right start to the game, it all falls apart as Juve just take hold of the game. We’ll lose Revault now too which is terrible news.

Man Utd cling onto top spot, we scrape a last minute winner as Romario comes off the bench to assist Denzil. 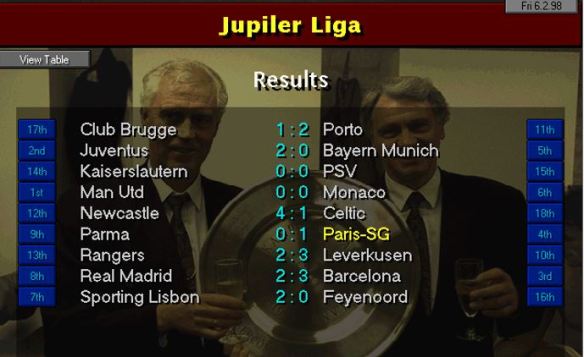 Gordon Durie and the Blockheads push us but money buys us a little bit of love despite being without our main man in the sticks.

We close out February with a poor performance, only managing a draw with 2nd bottom Club Brugge. An Awfuly showing with Rai getting injured. We are woefully out of form when considering the opposition for the last two games.

We’ve made some good ground over the mid-season, and despite Cruyff’s statement that he’s “never seen a bag of money score a goal” our summer signings sure have helped a good bit. Here’s how the Sky Bet UEFA Super League stands with the run-in coming up:

Celtic have been rooted to the foot of the table all season, the bottom two are surely down. We’re 6 points behind Utd but it’s not an unassailable lead by any stretch. And now Super League Two:

Ajax currently pipping Ronaldo’s Inter and its not clear yet who will be relegated to the abyss of Super League Non-League. 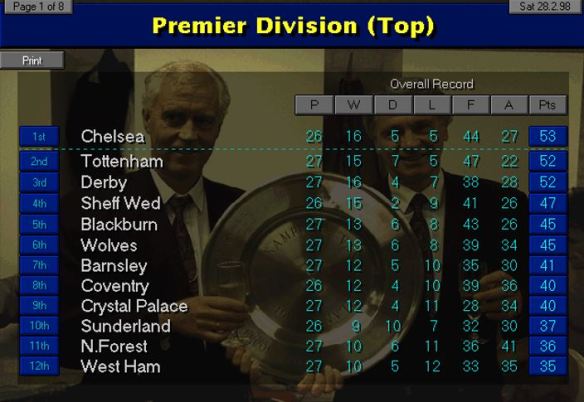 Total football bringing Sheff Wed right back into it with a game in hand. Wide open. The new boys at Kidderminster continue to boss Division 3, thanks in no little part to signing Tomlinson.

And to wrap things up, over in Spain, Betis are in control. 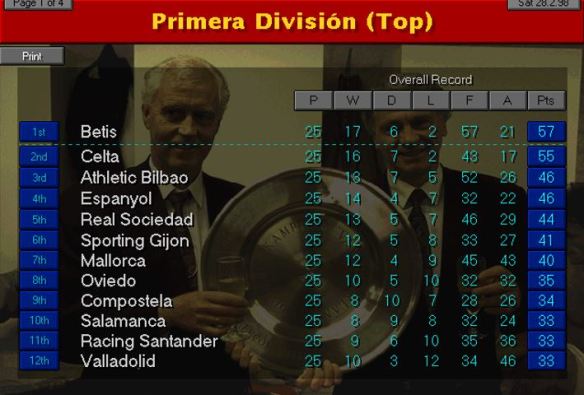 That’s all for now, but please do join us next time to see how the grande finale of the UEFA Super League turns out and whether we can change the fortunes of a poor old cash rich PSG, whether Derby County can win the Premier League, and whether Salguieros can become the most unlikely Champions League winners!