Catch up with Day 7 here

We’ve nearly seen every nation twice now and most groups are hanging in the balance. Today we focus on those two remaining groups who have only taken to the French turf once, so fans of Group F & G, you’re really in for a treat.

Italy have so many attacking options it was somehwat of a surprise when they only drew 0-0 with Yugoslavia. They dominated the game though and manager @FPLHints has written it off as “one of those things.” He was right to do it. It does however mean this match with Romania is vital, as a defeat could leave the Italians feeling more than a little blue. Get it?

It’s still an attacking lineup with Porrini in for the suspended Ferrara. Winning is everything! 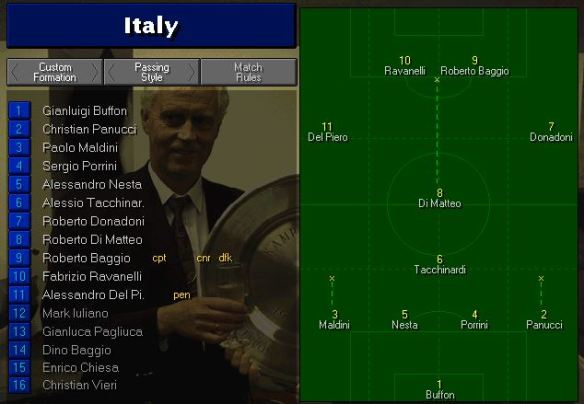 Romania under MK (@CorinthianHead Twitter fans) got off to a fine start, putting 5 past Paraguay and setting themselves up nicely for this crunch clash. A draw would probably do, but you wouldn’t change a system that just won 5-0. Dumitrescu is in for the injured Galca. 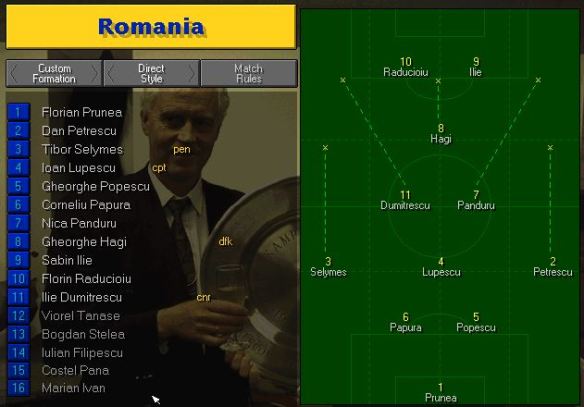 It’s always a decent game when two human managers go head to head but the luck that desserted them in the first game was not at play here. Italy’s swashbuckling attacking play saw them rewarded with a 24th minute lead as Ravanelli slotted home. Romania had the odd chance but this was Italy’s day and Del Piero doubled the lead just before the half time whistle. 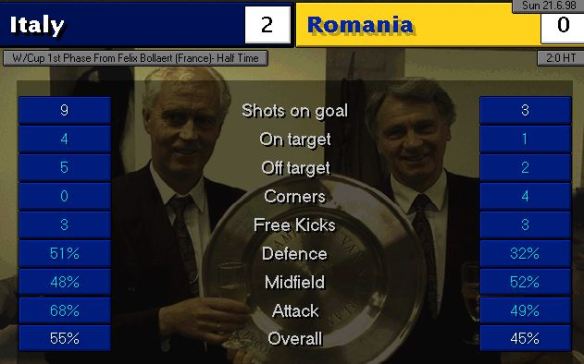 As you’d expect, Italy’s players have done quite well. Romania…less so. 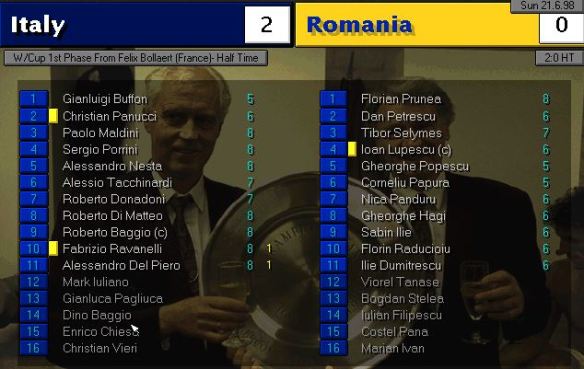 Can MK give the hairdryer treatment? Is their a Romanian equivalent? Well, Ravanelli scored again on 49 minutes and that should have settled that. However, in the same minute, Porrini got sent off a delibrate handball denying a goalscoring opportunity. Let;s think about that for a minute. Presumably from the kick off, Italy ended up being so exposed at the back their centre half was in enough trouble to stick out a hand and deny a goalscoring opportunity. Great. 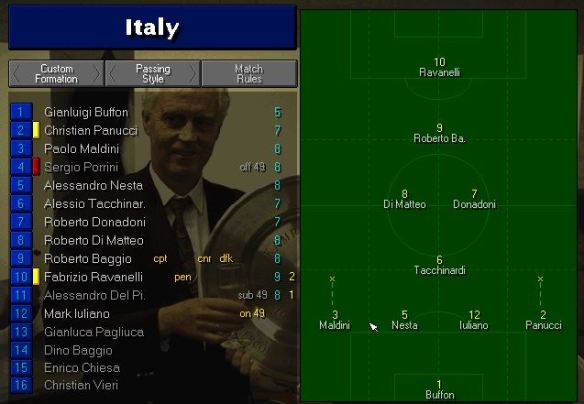 Anyway, Italy were able to shut up shop and Romania eventually got one back on 82 minutes as Ilie scored his second of the tournament. Not a lot happened after that. An important win for Italy and the Chief! 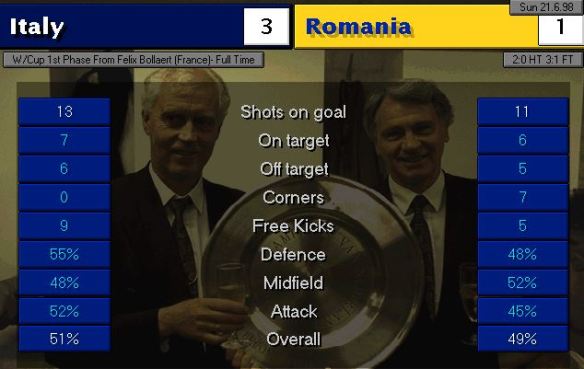 The Romania goalkeeper gets man of the match, which seems a bit stupid given what has gone before. 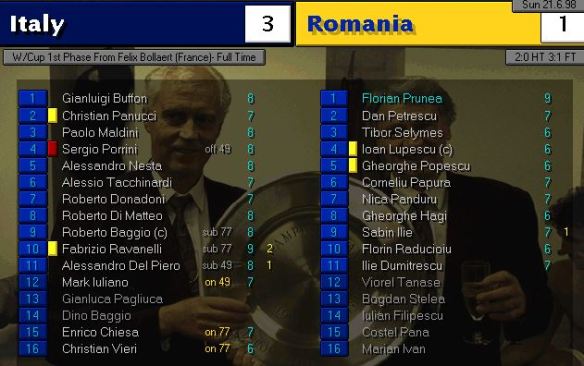 Yugoslavia and Paraguay finished 0-0 which leaves it in Romania’s hands at least. They’ll just need to draw to go through unless Paraguay are going to overturn an 8 goal swing by really sticking it to Italy. I don’t think they will.

So it looks good for our Group F lads, but it’s a little less rosy in Group G

Whilst I was quite happy with Scotland’s 3-0 win over Jamaica, I can’t help but feel a little concerned by Nigeria’s loss to Russia. The group is opposite B in the draw which means the runners up will play France…but Scotland should just be pleased to escape the group. To do that, we need to get a result here. Russia won’t be easy.

Same team. No messing about here. 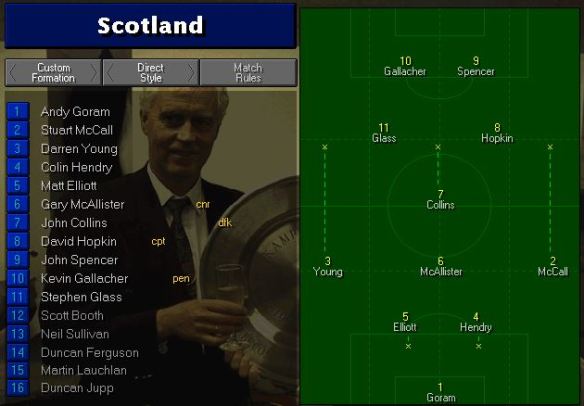 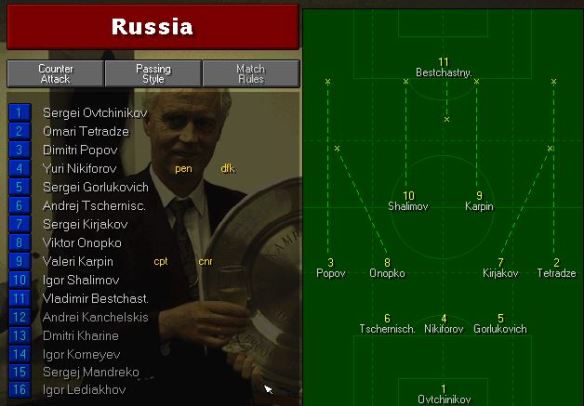 I’ve remembered to record! Here we are, or the screens are below

A win for Scotland would be incredible. They’ve never seen a knockout game – imagine that – so to do it with a game to spare would be ridiculous. But my how we have the bit between our teeth, peppering the Russian goal only to find a goalkeeper in inspired form. Basically, he saved our 4 shots on target. 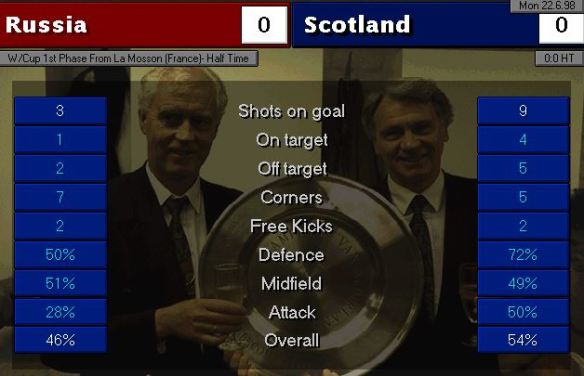 Matt Elliott is having the World Cup of his life, maybe I’ll put him up front like Leicester did in the good old days 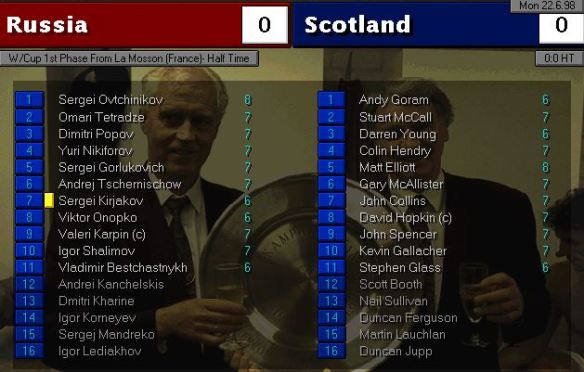 Second half and it’s more of the same. Russia manage only one further effort despite my back line lacking pace and youth whilst we continue to probe only to find  Ovtchnikov in the form of his life. Big Dunc is thrown on and it makes little difference, though he comes away with a decent rating. 0-0 it finishes, which is a better result for Russia than it is for us. Especially when you consider that we absolutely battered them. 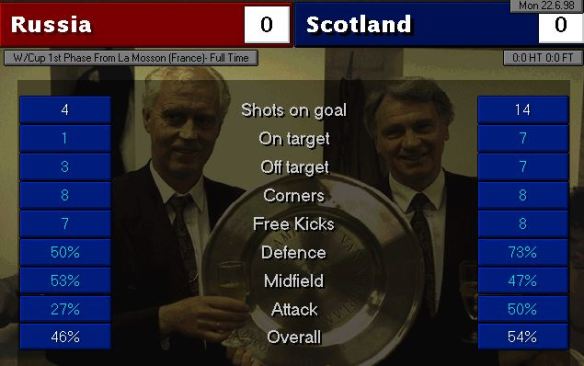 All hail Colin Hendry, apparently. Obviously their keeper is the real hero. 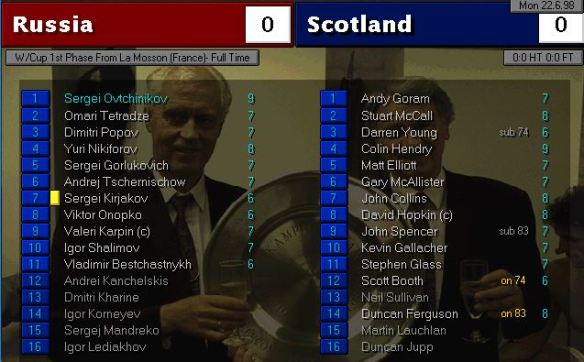 It means Nigeria can really put themselves back in the mix if they complete the expected victory over Jamaica. This is ideal for Nigeria, as they probably won’t have to do a lot of defending here. 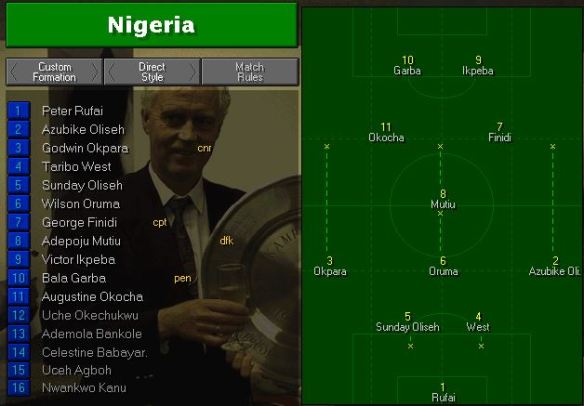 Jamaica have parked the bus again. It worked so well against Scotland. Marcus Gayle probably won’t be able to sort it out on his own. 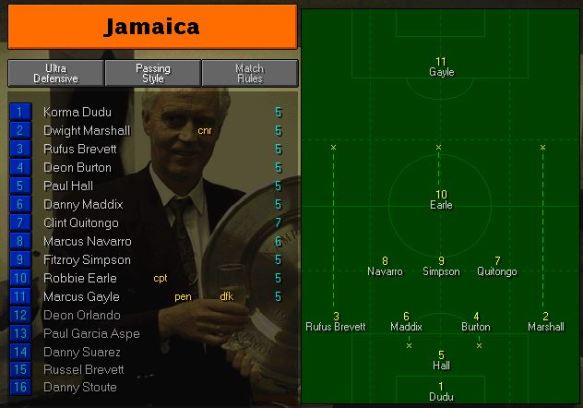 It’s a battering. Ikpeba scores after 3 minutes and it’s a sign of things to come. Oruma and Garba add another two in the space of 60 seconds midway through the half and that’s that, but Nigeria will want more. Scotland only managed 3 in 90 minutes against this lot and goal difference might yet be a factor.

I, er, forgot to get the half time stats and ratings. I have regrets. Not to worry though, Ikpeba makes it 4 on 59 minutes and finally Mutiu adds a 5th on 86. Okocha gets the perfect 10 but as you’d expect, everybody in a green shirt played their part. Jamaica were crap, except Korma Dudu. 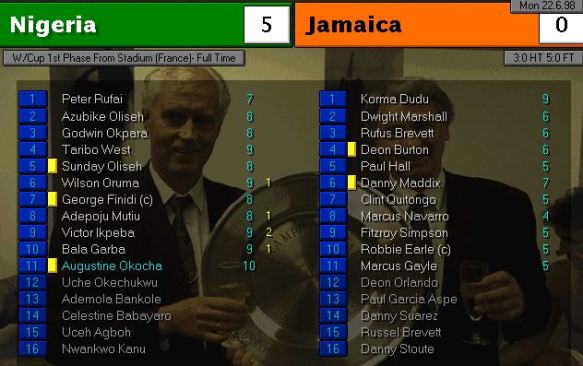 Nigeria racked up 31 efforts yet less than 50% of them hit the target. I knew he shouldn’t have left Ekoku out of the 16. 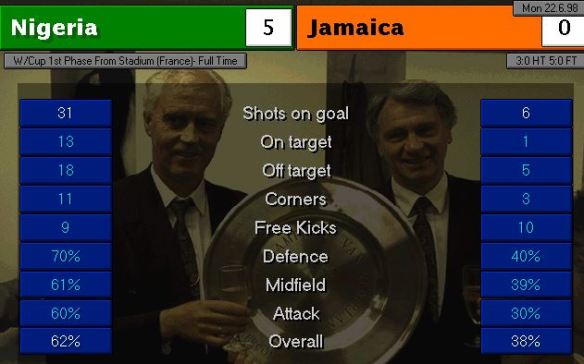 Confirmation then of this mighty rampage.

Group G is looking pretty interesting. It looks likely we’ll lose one of the human players, whether it be me or Matt will be decided by the final game shootout.

Russia have Jamaica so they’ll almost certainly win. There is of course the added bonus of winning the group meaning you’ll probably avoid France, but I think in Scotland’s case this is why the phrase “beggars can’t be choosers” came to light. Jamaica are eliminated.

Everybody has played twice now, so who is your money on? We’ll be back tomorrow with the final games from Groups A & B, which includes the Scandanavian judgment day clash between Norway and Denmark whilst Brazil and France are also in action. See you there.