Explanation of the next month can be found here

Welcome to Paris! Squint a bit. Here’s Des to welcome you to the opening ceremony. Shouldn’t you be at work?

Just about every day until June 14th we’ll have an update for you from the CM9798 World Cup. I expect I will be very tired. Naturally, we will start with Group A. It’s a tough group as not only are holders and favourites Brazil in it, it’s one of the two groups where we find three human controlled teams. Yes, one of these boys will be going home.

Group A was of course previewed a few weeks ago, so now it is time for Brazil to get this party started. Mark’s Brazil goes up against Ross’ Denmark and…just look at this team. 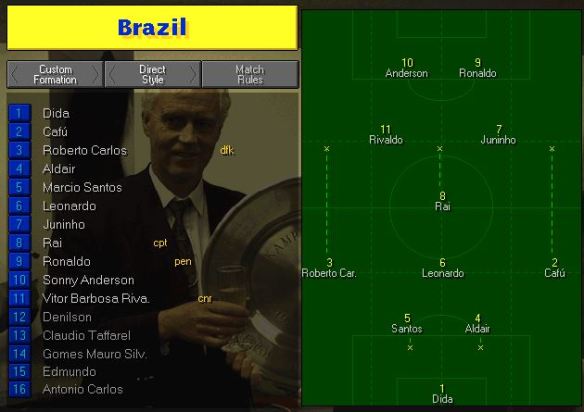 Adopting the formation we’ve all come to know and love, it would take a brave man to bet against Brazil.

Denmark, under the guidance of Ross (Parma save) have their own pedigree having won Euro 92. The Laudrup’s are a threat and Morten Bisgaard is a CM9798 legend. 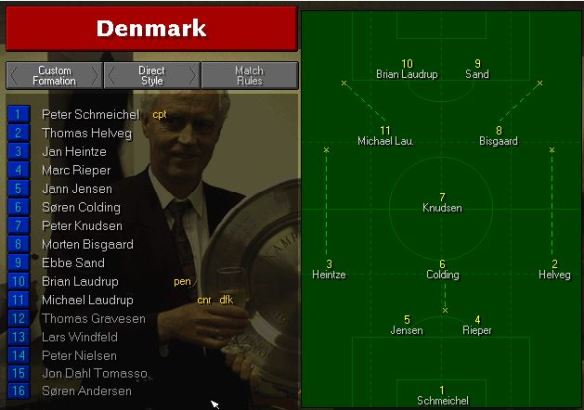 We’ll have at least one featured game a day which I will record, but I forgot to press record here. Hopefully not a sign of things to come.

With a feverish crowd demanding goals, captain Rai gave Brazil the perfect start with a 2nd minute goal, heading home a Juninho cross. Ronaldo and Anderson then combined for Brazil’s 2nd in the 21st minute, the Barcelona man chipping the onrushing Schmeichel. Anderson’s shot was then spilled by Schmeichel and Ronaldo made it 3-0 with just 37 minutes played.

Not a bad start to their campaign! Denmark were barely able to muster an attack. 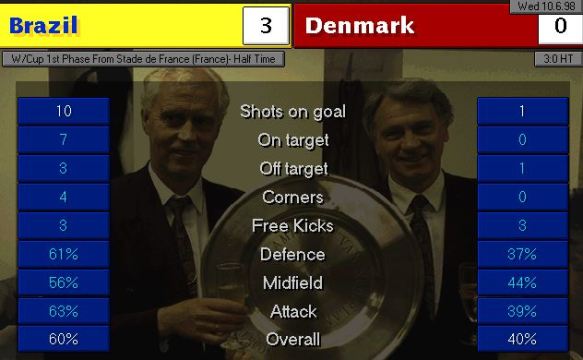 In the second half, Ross made some adjustments to try and keep the score down, knowing that goal difference may be key if Brazil carry this form into their other games. Anderson added a 4th with a long range effort before opting to rest star men Rivaldo and Ronaldo. An incredible start for the holders, a marker laid down. 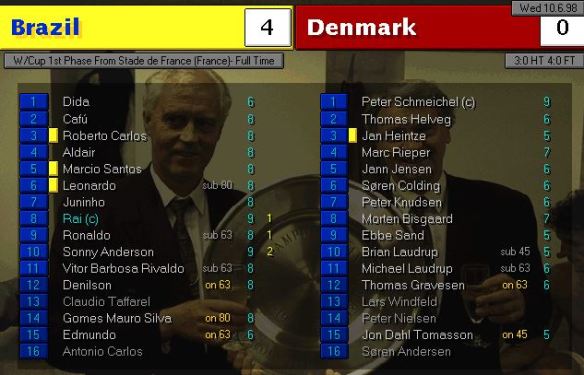 Total domination, though Denmark did improve slightly after the break as Brazil eased their foot off the gas. 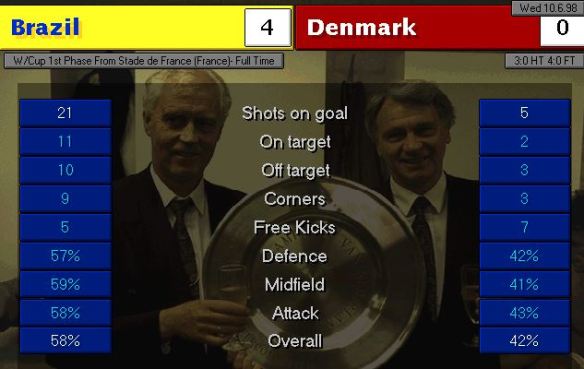 Confirmation then of the final score – the World Cup is underway in ernest!

The other game in Group A sees Norway tackle Saudi Arabia. Most people are predicting a 2nd place shoot out between Norway and Denmark in the final group game, but Saudi Arabia may have something to say about that.

The Norway squad is packed with talent. Manager KingoftheRooks was even able to leave Ole Gunnar Solskjaer at home.

Saudi Arabia have no actual players in this save, with so many playable nations a lot of the other nations have fake players all round. Yet they still pick a 5-3-2. Shitrit indeed. 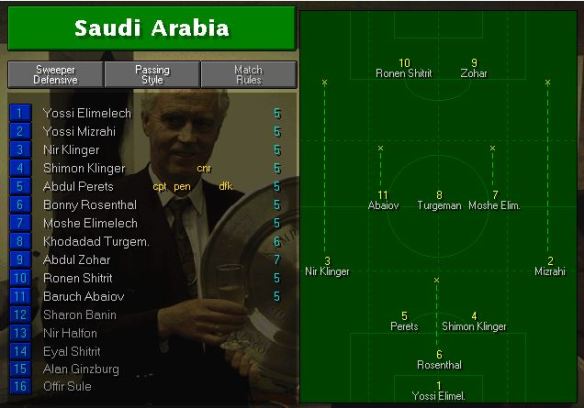 This wasn’t easy. The two formations seemed to cancel each other out and Norway had to dig deep. They took an 11th minute lead when Dan Eggen knocked home after a scramble from a corner, but the floodgates didn’t open. Naturally, Tommy Svindal Larsen ran the game.

Saudi Arabia still carried a threat but were second best in a first half that really never caught alight. 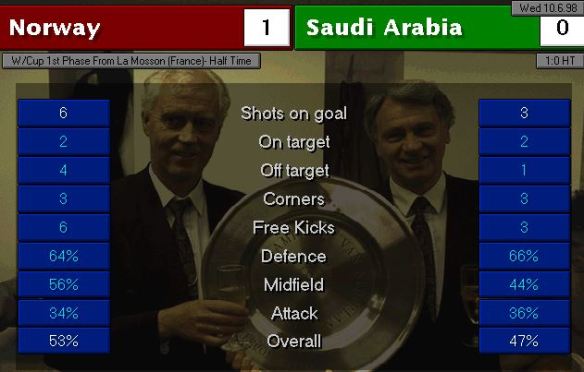 Svindal Larsen effectively settled the game as a contest early in the second half. Saudi Arabia didn’t manage any further shots on target and Norway will be pleased with the win even if they struggled to create many clear chances.

Obviously Svindal Larsen took home man of the match. One to watch!

That leaves Group A looking like this after the first game

All still to play for but Denmark could do with a big win against Saudi Arabia next time out.

In Group B, there’s only one human controlled team but it’s our friend @90sfootball and he’s the host nation, France.

It’s a weak group and one you’d expect France to get through with little trouble. Their first game is arguably their toughest as they face the USA.

Paddy has opted to create his own formation, but with the players at his disposal he could pretty much play any formation he likes. Thankfully, he is true to his word and lives his life in the 90s. Here’s his team on paper.

The USA were loaded as a playable nation as one of my backup plans in case the European teams took each other in the playoffs. They didn’t, so USA missed the cut. Wynalda and Kirovski are a canny front two and everybody loves Alexi Lalas. Obviously Brad Friedel is pretty useful with the gloves too. How does Claudio Reyna not get in that midfield? 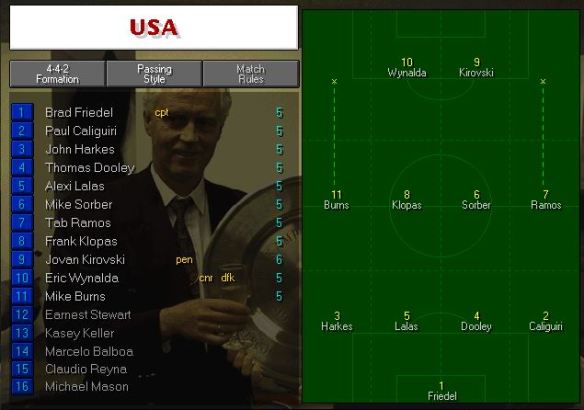 The good news is, I remembered to record this one! You can watch it below, or if you’d rather read about it, that’s below too.

France absolutely dominated this in front of their home crowd, though why the game has this coming from “Stadium” I don’t really know. Zinedine Zidane beat Brad Friedel but otherwise found the Liverpool goalkeeper in great form.

The USA centre half pairing had stood up well to a barrage of attacks but very little joy for their forwards. 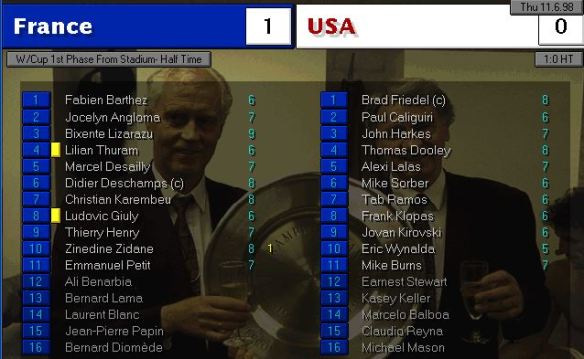 The arrival of Jean-Pierre Papin from the bench seemed to spark France into a second wind and they plundered two goals in four minutes to make the points safe. The options available to France are mind blowing, I wouldn’t have bet against a rematch of the real life final however they are in the same side of the draw.

It took Papin just four minutes to make his mark after coming on, whilst Zidane takes home man of the match for a goal and an assist. Solid from the hosts, who you can expect to see in the last 16. 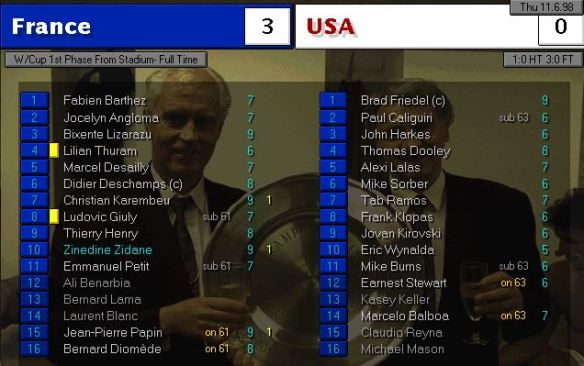 20 shots is impressive, whilst USA barely mustered an attack of note.

In the other game in Group B, China were surprise winners over Morocco. The African side lead at half time but China came back with the fictional Ming Cao scoring twice. 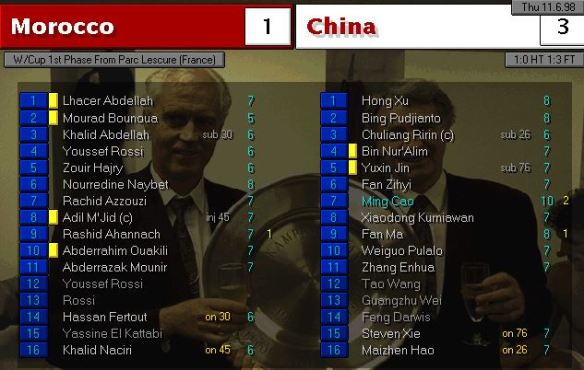 That leaves France top of group B, something I apparently didn’t deem worthy of screenshot.

We’ll be back tomorrow with Groups C and D. That means Holland, England, Argentina and Ireland. Not against each other I hasten to add. See you then!