Hello to you from Waregem, Belgium. I sit here in my fictional office feeling moderately content. I’ve taken Waregem from 7th to 4th in one season but that’s not enough. Our next stop needs to be the Champions League. We’re in the UEFA Cup too, which presents it’s own challenge, mainly because I forgot about the non-EU rule coming in to play and I had to have three keepers on the bench in one game. Nevertheless, our league form is good. How good? ICE COLD! Wait, wrong song. Let’s Belgium.

You may recall we hold a 2-0 lead over Croatia Zagreb, with the 13 or so outfield players I can actually name. Well, we drew 0-0 in Croatia. Wasn’t that fun?

Our reward is a last 16 clash with Servette. That actually sounds decent, unless Servette clean up.

There are many teams better than us still in this competition, but it’s probably the kindest draw we could get.

Off we go to Gent, back to the day job. It’s a solid win, the headline reads Perfect Gent and I silently make more Neil Buchanan jokes.

You’ll also recall I signed Dermot Monaghan (real name is not actually Dermot) but whatever his name is, here he is netting his third hat trick in the 5 weeks I’ve owned him. Wow.

Old man Emmers can barely stand these days but he’s a vital cog. He’s now allowed to play against Servette and LOOK WHAT HAPPENS

Good game for defences. Gao is a lunatic, a mad four minute spell brings 3 goals and a red card. Sometimes I wonder why I bother. Two away goals will help, though Monaghan can’t play so it really is all on Neil Buchanan.

I can’t hold the excitement in so I’ll bring you the second leg now. Who’s Dammann???

What great days. We’re a force at the Roogyboogy but I think we’re the team everyone wants in the Quarters.

Who do we get? Oh of course.

Before that though we’ve got Lierse away, who are 4th. It’s the type of game we usually lose but we’re just a different proposition these days. We can’t defend for toffee but we are from the land of chocolate, so keep your toffee and we’ll just keep scoring sweet Belgian chocolate goals.

Even when my pair of Scots don’t score, I still have the reliable Chilean to call upon. We make really hard work of this but Musrri arrives from the bench to make it a happy start to December.

We get a month off soon, but before we can dream of a month of Only Fools and Horses re-runs we have to travel to Poederlee, a non-league side in the Belgian Cup. I assume this is like the English FA Cup where the underdogs put up a stern fight but ultimately lose. Turns out the quality of Belgium’s non-league clubs is pretty much non-existant.

That’s a fourth hat-trick for Dermot. Buchanan remains a force. We did score a 10th but it was disallowed, annoyingly.

It’s Standard Liege in our last game before the break. They’re top, we’re second. It’s an incredible rise for us. Dermot gives us the lead and I’m already wondering what I’ll do with my keys to the city. However, we fade badly in the second half and Standard’s quality that has seen them win 5 out of 6 Belgian titles in this save shines through. Work to be done. Old man Emmers departs early too.

We’ve got a month to recover. I use the break to bring in some Belgian nationals who can actually play in the UEFA Cup. A left back called Casper Gabriel, combining my favourite ghost and member of Genesis, is the biggest outlay at £300k. A right fullback called Godart, aged 20, is in for free. It’s all about depth. Here’s the table as we relax.

It’s top 2 for the Champions League and that’s really the aim here. Are we ready to win the title? That defeat to Standard would suggest not. It’s Lierse away in the cup, which is a bit of a step up from the team of plumbers we beat in the last round. We’re just so damn professional. Emmers nets a second half winner and we’re in round 3.

It’s Standard away! That seems harsh. It’s another month until that fixture though, so we’ll plod on through the winter.

La Louviere can’t contain Dermot for even a minute. What a front two these boys are

Mechelen were in a real tussle with us last season for fourth but they’ve fallen away this season. They give us a real game here, Monaghan’s early goal being cancelled out by Paschal sticking one past the excellent Fessem, but Gao and Musrri pull us over the line. Somebody always steps up.

Club Brugge are having a bad season by their standards but our trip there is an opportunity to cement our place in the top 3. What transpires is actually the total opposite. A woeful day.

Gao makes Roy Keane seem like a calm person. Such is the way the fixtures have fallen, Anderlecht are up next as we run the gauntlet of big teams.

A huge win in the grand scheme of the season, the best Scottish duo since the Proclaimers once again coming up with the goods. Now, to Liege for a big cup game.

Have it! Peter Hoekstra shows why Stoke signed him by popping up with a late winner. It’s Brugge away in the semis. Give me strength.

Antwerp are in town in our last fixture before Aberdeen. Friday night fun with the usual two seeing us home. Let’s get on the plane.

So then, to Pittodrie. A place I have enjoyed some of my greatest moments in management. My seat in the dugout is now inhabited by Peter Beardsley. The squad I built is still filled with my former players, though it’s a bit like a neglected dog. Peter obviously not a fan of depth. 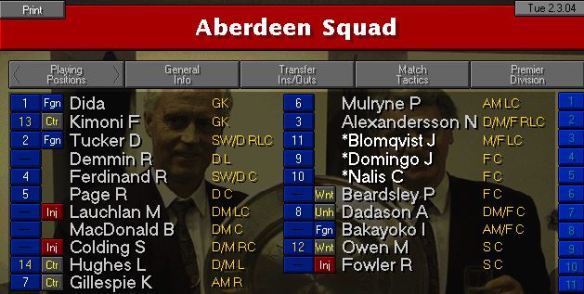 Lauchlan has a broken leg, which is a huge sgame for the lad. Nevland has just joined Milan after being frozen out by Pedro. Aberdeen are back in their place as best of the rest in Scotland.

9 of the 11 were signed by me. Domingo from Little Oakley I know nothing about but I’m sure he’s great. Make no mistake though, it’s still an extremely strong team even if they are managed by an idiot.

My team is about as strong as I can be, though Gao and Kumar are both suspended. We’ll give it a go.

We’re barely in it. Two quickfire goals condemn us to an early deficit and once Domingo makes it 3-0, we’re basically out. Buchanan’s late intervention might at least make it interesting back at the Roogy, but I’ll be surprised if we keep a clean sheet.

We’ll do it all again in two weeks back in Belgium, we need a famous European night of which I conjured up so many in my time at Aberdeen.

We’re second, 4 points clear of Anderlecht but 5 behind Standard. I’m fine with second. We can use the Champions League money to build. We’ve got a big result in us but Standard won’t lose many more. The last game of the season is at home to them though, so you never know…plus we’ve already played Anderlecht and Club Brugge twice.

I’ve barely mentioned the Premier League so here’s the table. I don’t want to talk about it.

Sorry for the mega update, I just got excited. See you next week!

I have Scotland in the CM9798 World Cup. Send help. That all kicks off soon but if you’re at a loose end, I was on Deep Lying Podcast this week discussing the upcoming tournament and CM9798 in general. Give it a listen!