Welcome back to my new life in Belgium. I learned this week that SV Waregem would go on to merge with Zulte VV in 2001 and become Zulte Waregem. Who knew? I’ve rather lazily been living in the future and referring to us in my internal monologue as Zulte. A history lesson aside, we’ve got a team to build.

With our new squad taking shape, we have a rather profitable November. Three wins and I’m feeling pretty happy with my transfer business.

December is less good. The thing is, the Belgian league takes a month off before Christmas and I reckon my lads are distracted by it. I’ve already got my bags packed for a month at home which probably doesn’t help our performance at Beveren

I tell them to focus and that Christmas will feel better with a trio of wins. Sometimes you’ve got to just be honest.

So as we prepare for a month off, here’s how the table looks. It’s going quite well, all I want to achieve this season is a place in Europe next season. The top 3 are comfortably the best teams in the league, but 4th is achievable.

That gives me a month to try and perform some more squad surgery. What I’d like to do to fill this void of in game action is to let you meet some of the team. You know, give it a personal touch.

Firstly, this guy is averaging 8.00 (EIGHT) from 17 games. He is my everything, which is odd considering he’s slow and can’t tackle. But boy, is he ever in the right position. A very reliable centre half. 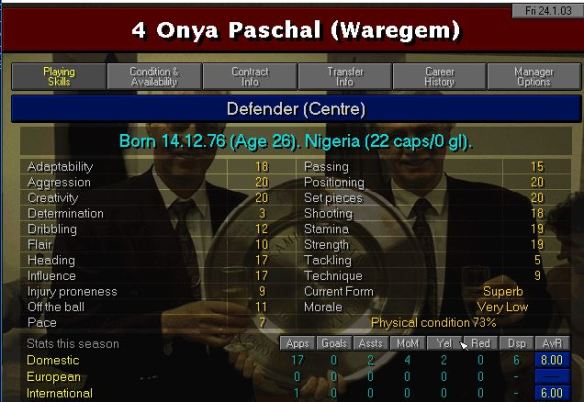 He had a big club release clause too but he’s signed a new contract without one. Joke is on him. His partner in crime is also very good and equally well positioned. He’s being courted by some decent clubs in France, but I don’t want to sell him for £700k as that won’t help anybody.

I showed you Mussri, Dammann and Lesmond in the previous update but I’ve had to use the free transfer market to try and give us some depth. Neil Buchanan will do well, you don’t get many strikers with great heading, pace, shooting and…set pieces. I have high hopes for him. 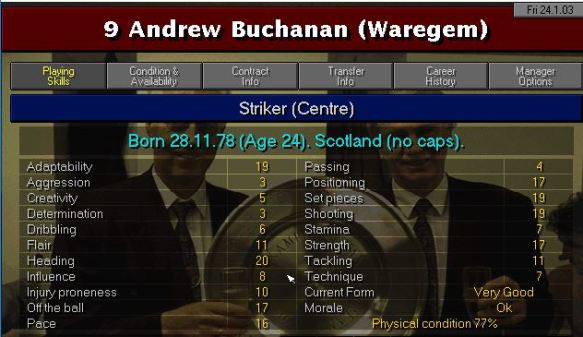 Finally, Jose Carlos De Jesus seemed like a good idea at the time but he’s injured already and he’s knackered after 20 minutes. Also, a Brazilian that can’t dribble? What was I thinking? 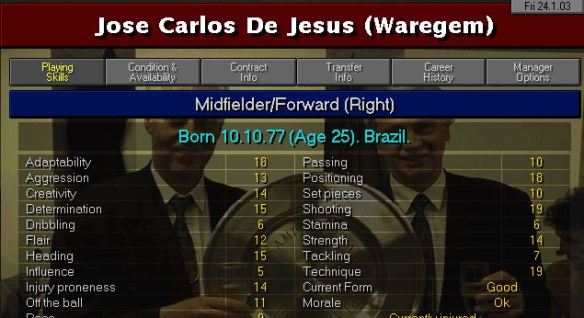 So it’s a lovely squad, though injuries and suspensions are mounting up which is incredible considering we’ve had a month off. We celebrate with an exit from the cup at the earliest opportunity.

A debut goal for Buchanan gave us the briefest of brief hopes, though Pat’s early red card was pretty ludicrous. TWO DAYS later, we score 4. If I shut my eyes and squint, we were a bit like Aberdeen.

Speaking of Aberdeen, they managed a draw in the Nou Camp. It’s remarkable because despite all the talent available to Beardsley he started young Robbie Keane up front then brought himself on after 15 minutes.

They’re also out of the Champions League…

…and third in the SPL. Honestly, it’s taken him 5 months to undo 5 years of hard work.

Anyway, back to Belgium and we’re still not as good as Anderlecht. Poor Musrri.

We can even afford to miss a penalty against Aalst and still win. Lesmond with a double and Zetterberg, who is far too good for this team, atones for his penalty miss.

That brings us to a Valentine’s Day clash with Mechelen, who we’re scrapping with for 4th. We start like a train, Buchanan showing us the art of attack early on though it’s a nervous last half hour. A big win.

That establishes us as the best of the rest with 12 delicious games to go. The goals against column is obviously an issue but it has been better since Fessem signed, though the fact we have 0 draws shows how we play the game. What’s Belgian for “shit or bust”?

It’s Club Brugge away next so if we can somehow win that we’ll start to dream of being able to hang on to the top 3 but it’ll probably be a heavy defeat. I’m a realist and a poor motivator. I’m quite looking forward to seeing if I can break the top 3 though, it’s a different sort of challenge.

Join me next week for the season finale, I’m off to think of some more Art Attack puns. Toodles!