We’re all about business here at CM9798.co.uk, and with the 20th anniversary celebrations behind us I decided it was time to go back to a more traditional save. I don’t have a time frame in mind for how long this will last, we’ll just go with it.

Friend of the blog and bundle winner S4ooter gave me this idea. He took over at Hibernian and was doing quite well before his team was picked apart by big club release clauses. So, to cut a long story short, I’m going to try and take a team for Scotland and firstly break up the Celtic/Rangers stronghold which is actually just starting, but the two sides are so far ahead of everyone else in terms of squad and budget by 1997/98 they are about to dominate for years to come. Rangers are particularly strong, with Brian Laudrup, Gazza and Marco Negri, whilst Celtic have Henrik Larsson and, er, Regi Blinker. Clearly, Celtic are more vulnerable than Rangers, but with only one Champions League place available in Scotland, nearly is nowhere. Well it’s the UEFA Cup but that doesn’t fit into a cliche. Who to be? 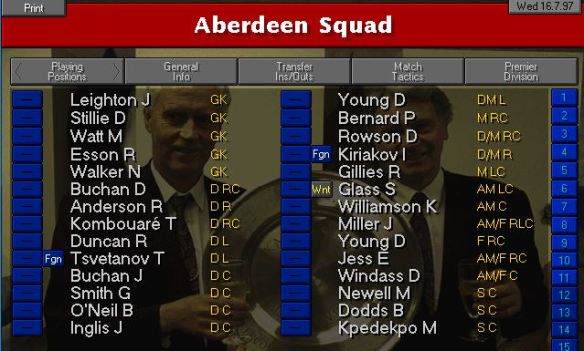 Why? Why not. Motherwell were 2nd in 94-95 but they have a 14000 seater stadium and are managed by the delightfully named Harri Kampman. Hibs have been done and are managed by Alex McLeish, so I’d rather leave him in place. Aberdeen have Dean Windass, whereas none of the others do. That’s what it comes down to. I’ve loaded the English, Scottish and Belgian leagues. I fancied a change. I don’t think I’ve ever loaded the Belgian league.

The squad has a ludicrous 5 goalkeepers and one more Mike Newell than any one squad needs. I’m resigned to losing Stephen Glass, who has a big club release clause but is valued at £2m. Glass went to Newcastle in real life and had a wand of a left foot but was, if you’ll allow me to quote Shakespeare, soft as shite. I’ll gladly take the money and set about signing all the usual lads who we know and love. Let’s face it, they are vital to success in this life or any other. I think I’m going to play 2-3-1-2-2 because it was insane but it suits my squad. Ideally Young and this Kiriakov chap can be the wingbacks, then we’ll sign 9 others. Pretty much everyone else can leave. Except Dean.

This is a good start

With Leyton Orient reluctant to sell our mate Heidenstrom, I turn my attention to stealing all of the good youngsters from Partick Thistle. It’s like taking candy from a baby, if you have to pay over £500k for three of them

There are others from Partick who I will be back for, but we have a staffing issue in that nobody wants any of the current idiots so I’ve had to release a load of them. The board are not happy. I also got greedy and asked for £3.3m for Stephen Glass, then when I got offered it I said no. They’ll be back. They always come crawling back. It’s annoying because Rob Page agreed to join but the money to buy him was coming from the Glass sale.

I’m trying to sign Dida, but as he’s taking ages to mull over whether he wants to play in Aberdeen for £8k a week, I’m left with a choice of a 39 year old or a 34 year old between the sticks. Leighton has 81 caps for Scotland, which is very commendable, but he has a stamina of 1. Instead I opt for 26 year old Michael Watt, who has 20 for shot stopping and positioning. Frankly, that’s all I ask of him. 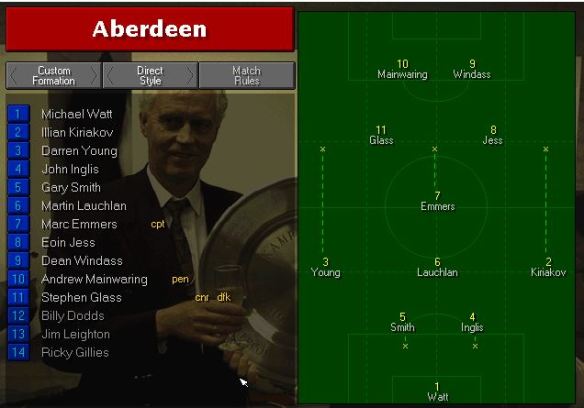 Their manager is called Bert Paton. That sounds like a pun on something but I think it’s just a silly name. It’s going to really annoy me only having three subs, I have a whole squad of signings to pick from. Anyway, Watt fumbles a ball into the box and we’re 1-0 down on 55 minutes. I bring on young Ricky Gillies because he can take a set piece and low and behold, Dodds (on for the injured Jess) equalises. We batter them, mustering 24 shots at goal, but it finishes 1-1. Their keeper takes home man of the match. 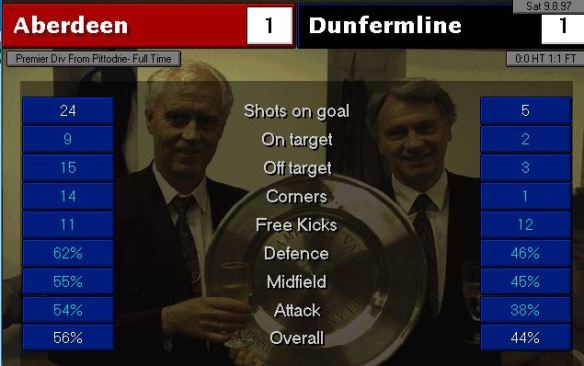 We’ll look back on this and laugh. I’m not sure when, but at least we made a shed load of chances. Maybe Windass isn’t the goalscoring machine I had him pegged as?

Dida joins shortly afterwards, ironically Leighton is called up to the Scotland squad which raises serious questions about their youth policy. We’re £700k lighter though and Stephen Glass has become a £3m millstone around my neck. Just leave mate.

It’s a home tie to Queen’s Park in the Scottish Coca-Cola Cup, one of the few tournaments carrying the title sponsor in the game. Starts for Dida, Gillies, Martin, Dodds and Tomlinson result in a 4-1 win, young Martin netting a hat trick. Why can’t we play Third Division opposition every week? Premier League Motherwell await us in round three.

Hang on a minute…

He played the perfect 10 against Queen’s Park and that has rocked Birmingham into action. At £4m I can buy all sorts of crazy buggers. There are Premier League clubs interested though…

You what?! Should have thoiught of that sooner. Poor Steve Bruce.

Hibs are the next visitors to Fortress Pittodrie (give it a chance) and I decide to bring back Windass and Mainwaring. They reward my loyalty in the best possible way

I have £1.4m in the bank, a full squad of 32 players but I can see the finish line in this transfer dance. Glass leaves for £3.9m, in comes Pagey and Sean Devine for a combined whatever amount, then we just watch the magic happen. I would love Heidycakes too but Leyton Orient seem intent on keeping him around.

The Motherwell cup game arrives and an unchanged team wins 3-0. That’s four home games played in a row, so typically we’re in at the deep end and an away trip to Celtic Park just two days later.

Considering we had old man river in goal from 36 minutes, this was a tough result. Johnson blazed over the pen and Celtic won with their only shot on target. Ho hum.

I’ve prattled on far longer than I usually do so I’m going to give you a break now until next week. I’ll be trying to peddle Stephen Glass if you need me. Toodles for now.

We’re back on Tuesday with Matt Porter’s Stockport Diaries. Catch up with the previous episode here