Welcome to another talking tactics, as we look at some of your weird and wonderful formations that have delivered success for you on CM9798. This time, we’re going back to the future…

Norbert – who we will hear much more from in September – certainly thinks it can: 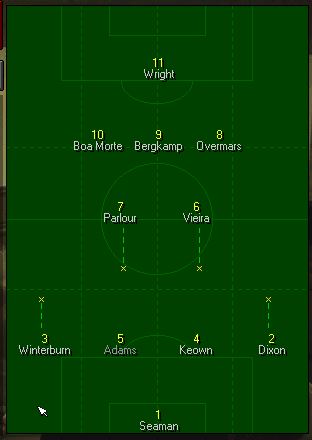 The one caveat is that the wingers are more tucked in, but I’m sure it’s a minor point. As you can see, Arsenal are my team of choice for this one. There’s something else, too

Woah! That’s blown things wide open. I have never considered the capacity of a stadium to be a factor but who bloody knows. I guess we’ll find out.

Some other points from Norbert:

Pace, dribbling and creativity is important for the Forward Right and Left.

Passing and Positioning is important for Midfielder Central

Off the ball is important for the striker

Heading, tackling, marking and strength is important for central defenders

Tackling, marking and pace is important for defenders right and left

Ian Wright fits the bill, he has 20 for off the ball. Adams, Keown & Bould will be very adequate centre halves, whilst Petit looks a better bet than Winterburn at left back. Lee Dixon will definitely need replacing.

Arsenal have £15m to spend so my first task is to find somebody better than Luis Boa Morte (probably not that hard) and then sell some players so I can upgrade elsehwere. 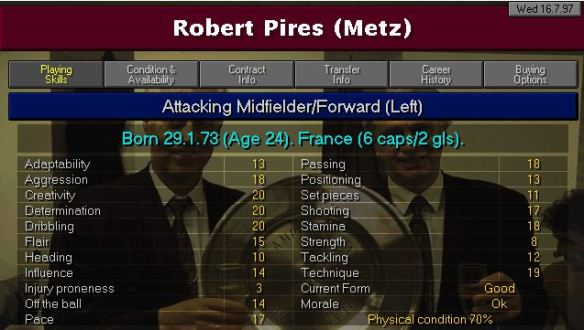 Unfortunately for me, Juventus and Barcelona also like the look of him so I have to go the low budget Liverpool flop version 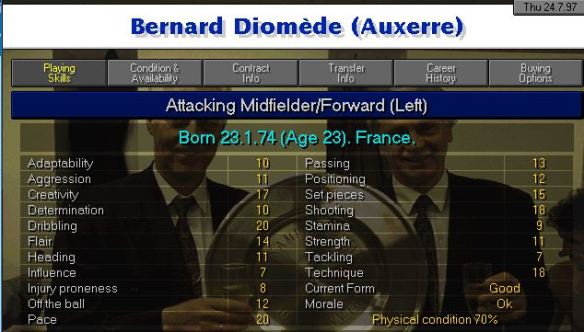 And so, on the same day Pires is unveiled in Turin, Bernard Diomede rocks up at Highbury. I’m sure it’ll be fine.

The only bid that comes in is an optimistic one for Vieira, so once they’ve been told to sling their hook, it’s time for West Ham away. With Adams crocked it’s the ultra mobile Bould-Keown combo at centre half, but what follows is promising…

Still, Ali Boumnijel was in nets so let’s not get carried away. Diomede is a lad though.

Wimbledon at home should be 3 points but how does the formation treat us?

For the second game in a row, we’re 3-0 up before half time. A poor second half nearly costs us, but I’m not sure if that was formation related or just complacency.

Liverpool away, now there’s a test. Keown is injured too so it’s Bould and young Wicks, who you may know from my saving Swindon series.

We certainly like an early goal. We don’t get one against Sheff Wed and we struggle to get a grip on the game – Wednesday play counter attack and presumably keep picking us off as we try to launch balls in behind for Wrighty. Eventually, 22 shots later, the points are ours

I didn’t expect to drop points at home to Coventry but thanks to Martin Keown, we do just that

Ogrizovic got man of the match, which is both good news and bad news. For football I mean.

We finish for the International break with defeat at Derby.

The International break passes by without any injuries and it’s time for the first Vieira vs Keane of the season, where Wright finally gets the better of Schmeichel and we win…

So a bit of a mixed bag to start with, I’m sure you’ll agree. The Coventry and Derby results worried me but it’s always good to beat Man Utd. What I didn’t expect was for this to be the first in a 20 game unbeaten run. Let me talk you through the highlights…

Goals are not a problem. Ian Wright is loving life.

Getting 6 on the road is a good sign, even if it is Palace. But it’s not just the attack which is good, the old Arsenal backline shows no sign of easing up

Nobody can stop us. We’re an unstoppable, Bernard Diomede fuelled machine

And yes, there’s the odd rough draw in there like Leicester at home but I put that down to Pegguy Arphexad more than a bad tactic.

The proof of success in any of these tactics is how close you can get to Man Utd in season one – they nearly always win the league by a huge margin. They shouldn’t really in this save:

Look at that goals scored column. Ian Wright is a God in this formation, but how has he only managed one man of the match award?

I think, and I don’t know if this is fact, that in this formatino the striker literally runs in behind for the whole game and he either scores or he doesn’t. The rest of the game he is not involved and as a result his overall stats probably aren’t great.

Besides, he has to compete for man of the match with Bernard Diomede (and Dennis Bergkamp) and nobody can do that 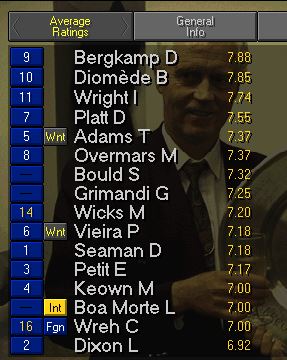 Hubba hubba. As predicted, Lee Dixon is the weak link but it’s barely noticeable. We do what we want.

Everybody’s main aim is to find the striker. If anybody else scores it’s probably a rebound or an accident. 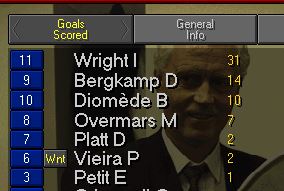 I should point out I played with the direct style for every game, it seemed to do alright.

The unbeaten run ended with a 1-0 loss away in Auxerre in a game where we entered 3-0 up from the first leg, so I couldn’t care less. Whether I got lucky with the personnel or not I don’t know, but certainly Ian Wright’s skill set seem absolutely ideal for the striker position. 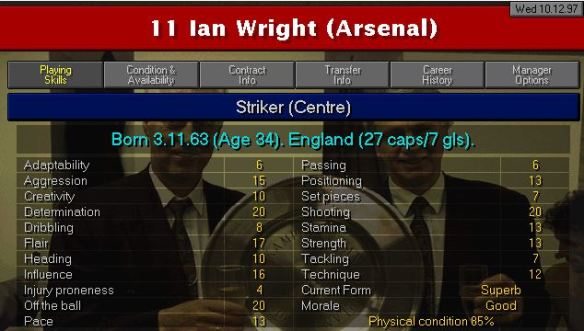 I’ve got to give this formation 9.5 Bakayoko’s out of 10, only dropping .5 because I can’t say it is perfect if we don’t have a 100% record. Thems the rules. It’s going to take some beating though, you know what you need to do…