Did somebody say season 28? Well if they didn’t, they should be, because that is what the 2024/25 season is better known as. Darlington take their first steps back in the Premier League whereas England, as holders of the World Cup, are saved the indignity of having to qualify. It’s just a meaningless run of friendlies, all about preparation for World Cup 2026…and a chance to get Beardsley ever closer to his 100th cap. I’ve arranged friendlies next June against the Cayman Islands and Yemen to help him on his way, but more on that later.

So, Darlington. The first season after promotion is always one of the toughest, and I’m not helped by having a very full squad. As a result it’s taken a few months to get somewhere near where I want to be. Here’s the squad as we reach November

I’ve stuck with the 3-1-3-3 that saw us shoot up the Division 1 table to snatch automatic promotion, partially because I built a squad around it but also because I can’t attract any decent centre halves. So having just one works for us.

Christanval is my newest signing, I can’t believe he was only £250k 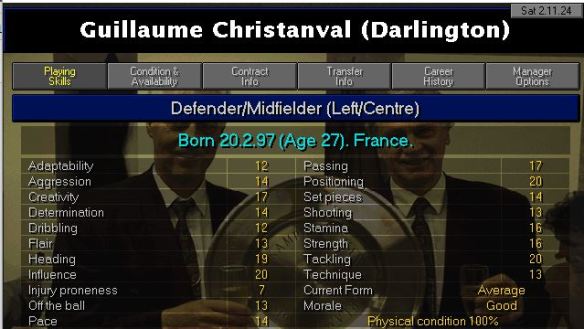 Great tackling, heading, positioning whilst being creative with good passing. He’s a dream. Other famous faces including Bakayoko v3 Joel Domoraud and Rui Eusebio, who is about the 4th version of Luis Figo. Nogueira you may remember is Zidane, who I had at Newcastle.

More on how Darlington have got on later. Where are my manners though, the season opener has happened and it went to penalties. 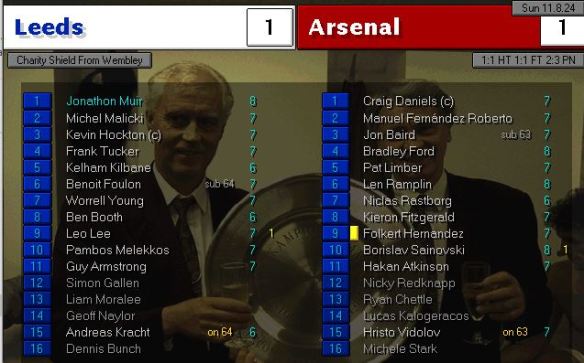 Great times there then. Meanwhile England’s friendlies are underway, with Chile visiting Wembley

Love you, Peter. He’s approaching 64, which the Beatles sang a song about, but he’s hit 90 caps, which is great news. 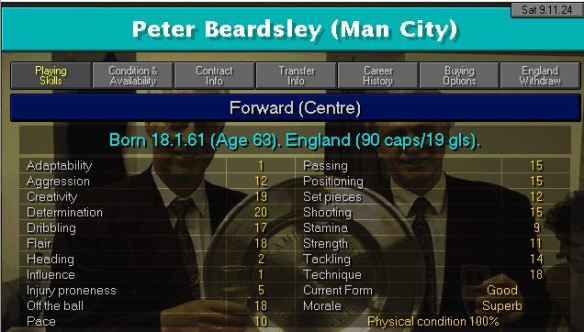 He’s still not picking himself for Man City, so I suppose that’s helping his managerial career.

We’re in the last 16 of the pointless cup, words can’t do justice to my excitement here but Palace away is what dreams are made of in a competition with no actual reward.

My aim this season is to get back into Europe, whether it be through League position (unlikely) or by winning the FA Cup…which is probably as unlikely but you never know. The league is going ok so far, we’re not in the bottom 5 which is a plus 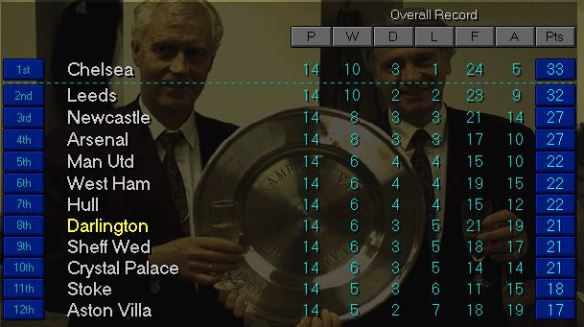 Unsurprisingly my open formation means we score as many as we concede – we’re particularly rough on the road, where we have won once and that was at Boro, which is barely away at all for us.

At least we’re not Blackburn…

Not looking great for Beardsley either, with seemingly no incidents taking place in their matches.

So there we go, part 1 is banked and we can all get on with our days. I make it 5 updates to go if the rumours are true and the end comes in 2026…I am nervous. See you next time!