Many happy returns are in order to Peter Beardsley, who has just turned 60. 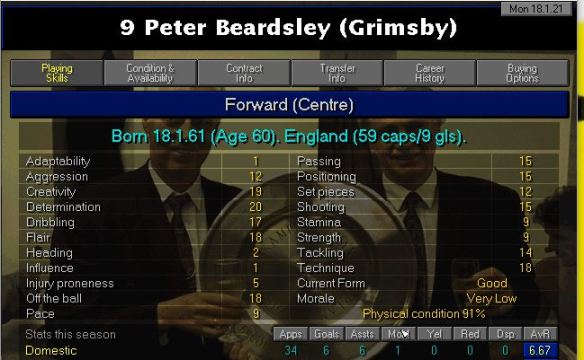 Beardsley celebrated the last game of his 50’s by playing 54 minutes of Grimsby’s 3-2 win away at Southampton in Division 3, a remarkable 42 years since his debut for Carlisle in 1979.

A special Peter Beardsley Celebration game has been arranged, as AC Milan visit Blundell Park to pay tribute to the hero of the hour.

After joining Bolton from Newcastle, Beardsley rammed in 15 goals on his way to keeping Bolton in the Premier League, with the Trotters finishing 14th. It’s relegation though in 1999, with no goals in 12 games Bolton finish 18th and drop down to the second tier, where they stay for a couple of season with Beardsley making minimal impact 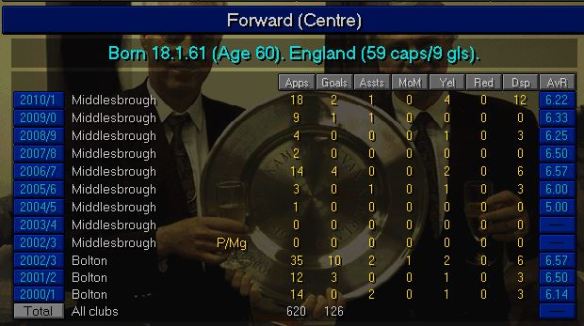 As Beardsley turns 40, he is still picking up plenty game time at Bolton but when Jack Charlton retires from Middlesbrough, the call comes from the main man to take his first steps in management. It’s a Premier League job and Peter takes it very seriously, not picking himself for a few season. It’s all going so well with a 9th placed finish followed by a slightly less impressive 16th in 04/05, and the slide continues into 05/06 where Middlesbrough finish 18th and are relegated. Despite that, Beardsley keeps his job and brings the Boro back to the Premier League at the first time of asking. It’s all going well for Pedro as they finish 6th and 7th 2007/08 and 08/09 respectively. Beardsley then scores his first goal for Middlesbrough 7 years after joining them as they finish 13th in 09/10. Bitten by the bug, Beardsley scores twice the following season as the Teesiders finish 10th, and Beardsley makes 50. 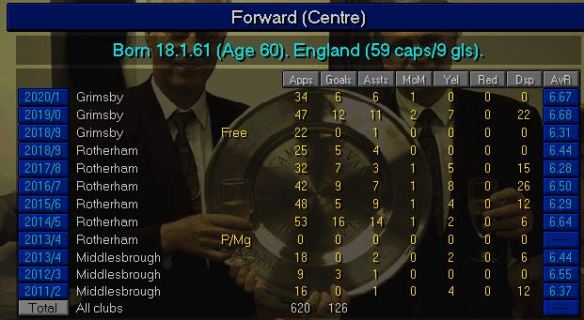 Things start to unravel for Peter as Boro crawl to a 16th placed finish in 2012. It’s a sign of things to come as 12/13 sees Boro finish rock bottom, as Beardsley is relegated for a second time. After getting off to a sluggish start, Beardsley is dismissed from Middlesbrough in the 2013/14 season with the club 14th in Division 1. He doesn’t have to wait long before he is back in the game, with Rotherham offering him the position of player-manager for the 2014/15 season. Despite being 53, Beardsley picks himself for near enough every game and, even more remarkably, ends up being promoted to Division 2 via the playoffs. At the end of the 16/17 season, Beardsley’s stats have declined so much he is unrated in several categories as Rotherham as Rotherham maintain a midtable position in Division 2 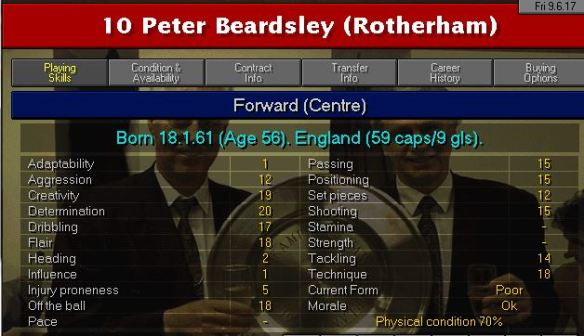 After a few seasons of no progress, Rotherham sack Beardsley. Despite being 57, Grimsby and Plymouth both offer him a contract as a player only – Beardsley opts for Grimsby, presumably because they play in Black & White. Grimsby currently sit 6th in Division 3, with Beardsley a regular starter and even having filled in at centre half!

So here’s to you Peter Beardsley, 60 and still going strong. You’re never too old!