Good day! It’s the final update of the 2016/17 season and it’s been a relatively quiet season, all things considered. Last time out I’d guided Newcastle to the FA Cup semi finals and within touching distance of European football via the league, but before we get to that, there’s something more pointless to sort out.

Given that last season the game correctly predicted a Liverpool/Man City final that went to pens, fans of Arsenal & Aston Villa should be getting excited

Maybe not that excited. A 0-0 draw ends with a late Kevin Mulligan goal and it’s more silverware for Damien Johnson’s men. Let’s move on.

Me! We’re still in a cup by this stage which is remarkable in itself, but better yet I’ve not had to face a Premier League team yet. The semi finals is no different, as we battle Birmingham.

Well if it isn’t Matt Le Tissier and Manchester United. That’ll be a laugh.

It’s such an occasion I wrote a Live Text covering the final in more detail which can you read here, but for those who prefer the edited version, have a scroll down

A real humdinger, obviously. And I should know – I had to write about it in great detail. But we won! That’s the main thing, and that guarantees us European football next season for the first time since 1998. The re-build is almost complete.

Speaking of Europe, could Steve Haslam lead Blackburn to the final?

No. It’ll be an all Dutch final, and with Holland as world champions, it’s a great time to be Dutch.

An even better time to be an Ajax fan. Great. If you think that’s sort of normal, Hellas Verona won Serie A, replacing Cesena as champions. For real drama, let’s go to Spain. 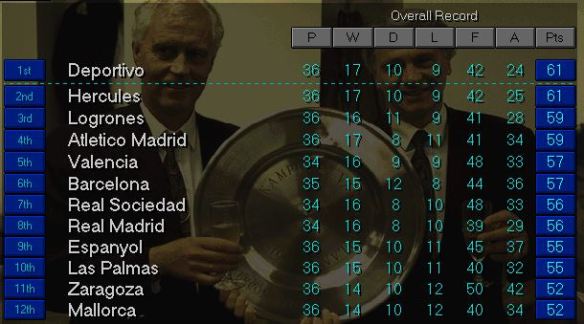 Oh how boring. Taking 23 points out of a possible 27, Real Madrid go from 9th to winners. David Unsworth has won La Liga. It also means he’s taken them up from the Segunda to winning La Liga in 2 seasons. The man is a machine.

Back in England, there was no such excitement. We need a point on the last day to secure a top 6 finish, but we’re up against already crowned champions Darlington.

Pick the bones out of that. We did it though, 6th!

Derby and their millions will play in Europe’s elite club competition, whereas we’ll be in the Cup Winners Cup after our cup win. At the bottom…

Meh. Brian Little’s Liverpool had a season to forget, that’s about all I can take from that.

David Beckham’s managerial career has been unbelievably bad. His latest disaster involves getting relegated from Division 2 with Scarborough and deciding take over at also relegated Chester.

Totally deserved, this guy kept us in so many games. 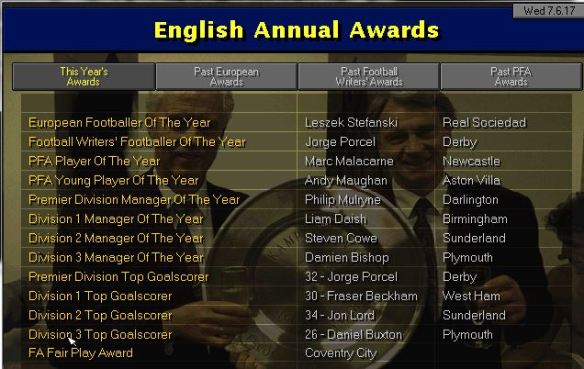 WOW YOU SHOULDN’T HAVE

It’s all too much for Peter Reid

But one man can never have too much

Another season in the bag, he’s signed up for season 21. I hope we’ll see you there!