The 14/15 season should be a season of celebration for me – afterall, I’ve been slaving away getting Newcastle back into the Premier League for a few seasons. Now we’re back on the big stage and reality has dawned – we’re really not very good.

We were dealt a very early blow when Liverpool took advantage of Denis Irwin’s re-gen having a big club release clause. I just didn’t see it coming!

I’ve decided to take on this McGibbon character in exchange, the money means very little to me given that we can’t attract anybody. I firmly believe the most important player in this game is your goalkeeper, in theory this guy should be unbeatable 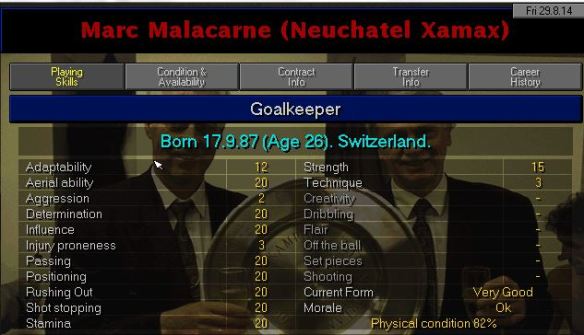 Unfortunately that technique stat seems to have more of an effect than I anticipated, meaning he’s just another average goalkeeper to go alongside my other 3 or 4, which include Chilavert’s re-gen re-gen. When you’re onto the 3rd iteration of a player… 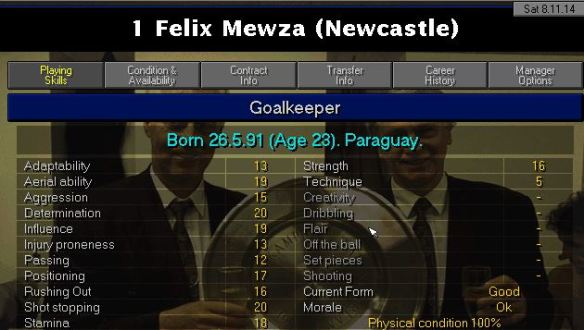 My other choices? The keeper I signed for Norwich: 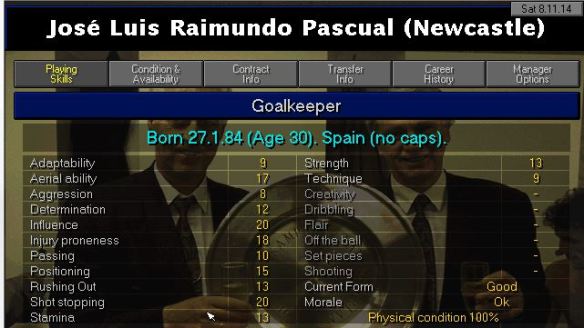 A man with caps for Scotland! 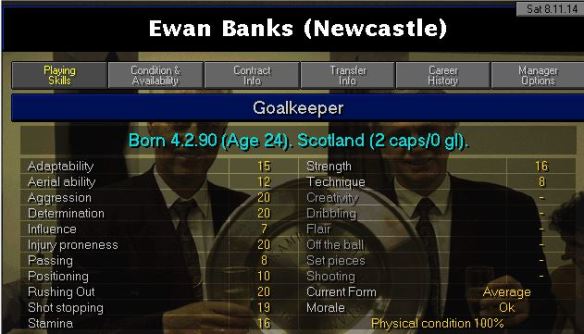 And some other messes with crisp packets for hands. They’ve all had their moments but it’s costing me points. Might be one for twitter to solve.

It’s been largely downhill ever since though. More on that later.

You may recall Kieron Dyer retired, with 122 England caps to his name. Not only have I signed his re-gen, but the man himself has gone to coach Bari

What’s more surprising is that they sit in the playoff positions in Division 3, so maybe some better times head for Spurs.

There’s also big news as the one surviving original manager is sacked.

My former for Chris Waddle, way back in the Division 2 days with Darlington, has been in charge for about 17 years but Burnley have seen enough. About time.

For some, it’s all just too much

Chelsea continue the bizarre tradition that this game has given us, which is appointing Alvin bloody Martin

A big favourite of this blog is Peter Beardsley and his refusal to retire. Pitching up as Rotherham’s player manager, there’s no sign of him slowing down, continuing to start himself in every game. However, he has loaned EVERYBODY 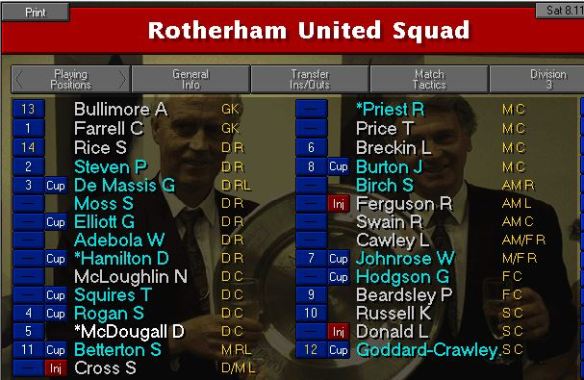 Away from our perilous league position, we’ve scrapped our way into the last 16 of the pointless cup

I imagine Brian Little will end our run but any sorts of victories can’t be sniffed at when you’re in our position. What is our position you ask? 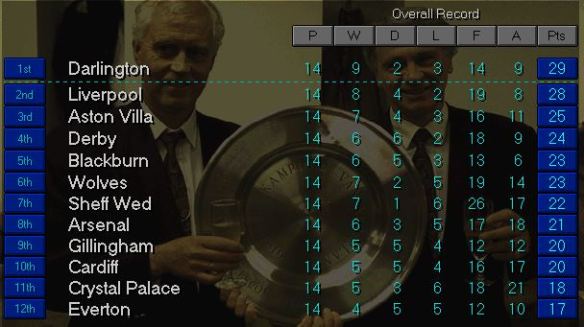 Well, we’re not in the top 12. The familiar sight of Darlington & Liverpool scrapping for superiority, Darlington wowing the world with their goal a game ratio.

Urgh, there we are. No wonder Burnley sacked Waddle. Fortunately I have plenty of good favour with the board and they’re still delighted by my performance. And so they should be.

Squad is a mash of names that will mean very little to you!

So we’ll be fighting to stay up, join me next time where I’ll hopefully have some good news as we move towards the business end of the season. Bye for now

The World According to CM97/98 is available on Amazon now