After coming to the realisation of how big the job of re-building Newcastle United is, things have actually taken a bit of an upturn as our form has lifted us into the upper echelons of the table. Too little too late? Or the start of something big? Let me tell you about it…

As we drift into the winter months, everybody’s favourite cup competition has started. We’ve used it as a bit of a springboard and we’ve been given the toughest tie possible – away to the Premier league leaders.

We love a big game

Ridiculous emotions to miss a pen at 2-1 against 10 men to conceding an equaliser immediately. Oh well, back to St James’

Goodness me. What a result! It doesn’t end there either, and before long we’ve found ourselves in an FA Cup quarter final

Sadly that is as far as we go

However, there are other cups

Who fancies a trip to Wembley?

It will be a Magpie vs Magpie clash at Wembley in April.

Seeing as we are here, here’s how the FA Cup semi finals have shaped up.

Back to the more pressing matters of our league form, we’ve really turned it round. Just look at the reverse of the opening day fixture!

Get in. This lovely graph sums up how mint we’ve become

Very up. Ok, a slight blip in the middle but now we’re right in the playoff mix. The main reason is this man, the George Weah re-gen who I’ve somehow been allowed to loan but he’s not for sale 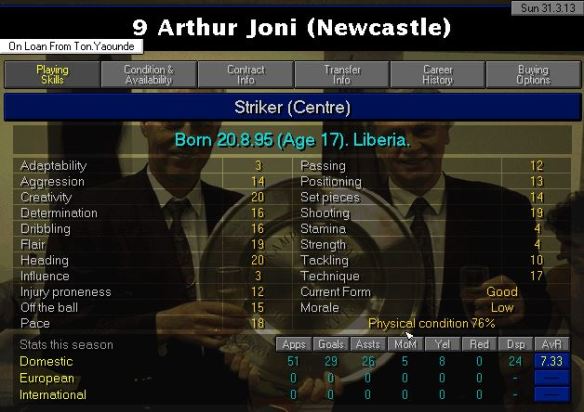 His strike partner knows where the goal is too, but he was here when I got here.

60 goals between them. One slight blemish is that the old big club release clause has struck again and my left back of 5 months is off.

The top of Division 2 is still toight like a toiger, 7 games to go and we’ve reached the top 6 for the first time.

With a trip to Wembley to come too, it might be a canny end to the 12/13 season.

Away from the rough and tumble of Division 2, there’s a pointless cup to be won

Gordon Milne is the old unflushable turd, 3-0 down from the 1st leg to stun Brian Little. Sheff Wed continue to be involved in the important matters, that Argentine striker makes all the difference.

There’s also the Champions League, many worlds away from where i currently am

Juve, Darlo, Sevilla…you could argue they are the biggest 3 clubs in the game. The semi finals make for 2 good games.

With that, let’s look at the Premier League 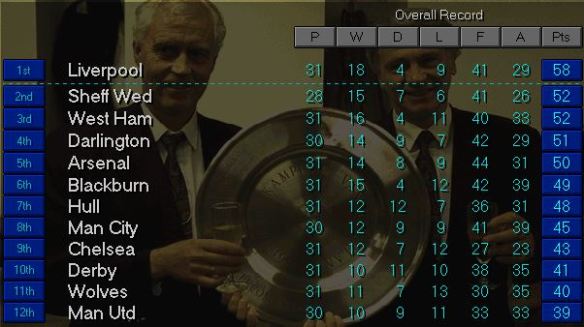 Sheff Wed’s games are piling up so it’s the old conundrum of whether you’d rather have the points on the board or the games in hand. Really I’d say any one of 4 teams could win it, with Darlo clinging on with that game in hand. Look at Man Utd though…midtable.

At the bottom, Norwich have began to slide, as have Beckham’s Leeds. Beardsley is back from his broken leg and is picking himself for Boro at the age of 52, it’s not doing them any favours though. Villa appointed Damien Johnson as player manager in the summer and that seems to have been their undoing – they have never been relegated on this game but they’ve got a lot of work to do to get out of this one.

So another update has come to a close. Join me next time as I hopefully tell you about a great season end for Newcastle – but I wouldn’t bet on it! Tata for now.

1 thought on “Joni Be Good”