Here we are then. March 2006 and Darlington sit at the summit of the Premier League. Are they about to confirm their status as the best club in England? It’s taken 9 seasons and a lot of re-gens, but we’re nearly there. Let me explain how the middle of the season has transpired…

First stop is World Cup qualifying. The 2006 World Cup will be held in England, so there’s no qualifying to be done for Hoddle’s men. Last time out I predicted Spain’s appointment of Fabio Capello would see his side qualify with ease. All they have to do is win in Liechtenstein 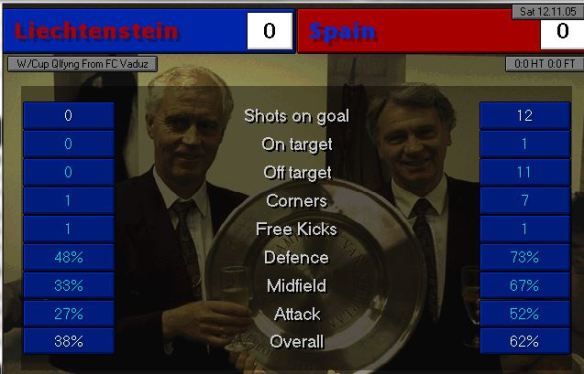 England’s group is pretty tough, but as hosts you’d expect them to get out of this:

Elsewhere, the latest move to spice up the FA Cup is to play it the 3rd round on New Years Eve

It’s a pretty tough draw but we see them off to get our defence of the trophy off to a good start. In fact, we’ve made the semi finals!

West Ham actually knocked us out of the pointless cup in the Quarter finals, which I wasn’t too upset about in all truth, and they see off Chelsea in the semis to set up a final with Leeds.

For any new readers, I should point out that I call it the pointless cup because you don’t even get into Europe for winning it. All that effort for minimal reward. Speaking of Europe, our Champions League adventure is over in dramatic circumstances

Considering we took first, Jaliens had the chance to put us on the verge but he is the re-gen of Ronald de Boer, and I should have taken that into account. On the other hand, the re-gen of Stoichkov missed my final pen so I don’t think you can read too much into it.

Man Utd see off Bologna in extra time, a superb effort by Gordon Milne. He has my conquerers PSG up next.

Milne has been doing it the hard way – here, he wins the Super Cup despite losing 3-1. Brocchi’s extra time goal does the job…

Napoli have been on fire though – in fact, they’ve won the league already!

The Premier League is of course the bread and butter and in order for us to return to the Champions League, we’ve got to finish in the top 2. We’ve been doing ok, so much so we’re top of the league with just 8 games to go 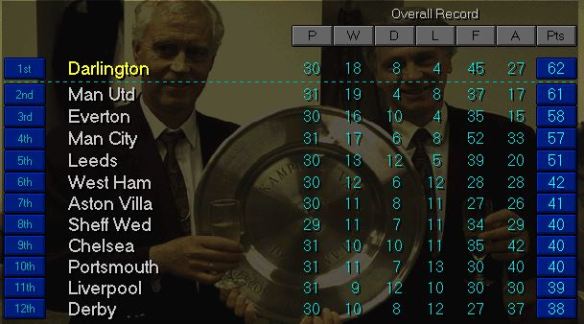 It’s probably a 4 way chase but Leeds can’t be ruled out. The last day of the season will see Man Utd visit Feethams, which could be the decider. I’ll hope to have it all sewn up by then though. At the other end…

Chris Waddle is still Burnley manager, they might stay up but the three in the relegation zone now have got a lot to do to stay up. I’m surprised to see Palace down there but not sorry, they’ve been a menace to me down the years.

So as we’re entering the final months of 05/06, I hope you’ll join us next time for hopefully a league title celebration, as well as the World Cup being in England. Will Feethams get a game? We live in hope. Bye for now!