The summer of 2003 has come and gone, and right from the outset clubs are trying to outdo each other in who can make the most ridiculous signing. I’m in on it too, and it’s been a pretty interesting start to the 03/04 campaign. Shall we?

Firstly, a man who has had plenty of jobs in the 6 completed seasons so far will have no more, as Jack Charlton has retired from management

Boro go for Peter Beardsley as playaer manager – yes, Pedro is still playing despite being 42.

I’ve been eyeing up his re-gen for a while but now it seems less likely to find him unless he gets sacked before the season is out. We live in hope.

So the stadium is now three times the size it was back in 1997. We’ve got some extra money now as the people of Darlington pack out our stadium, so it’s a veritable feast of signings 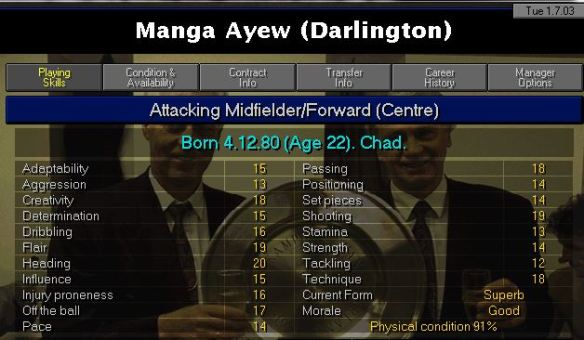 Sansome is a right back/wing back, Haslam is a legend from V1 of this blog, Robert Page is my go to guy and Ayew is the re-gen of Japhet N’Doram. It’s the strongest side I’ve had with Darlo, which sort of goes without saying.

Meanwhile, let the loyalty fade away…

Not satisfied with raiding just one Merseyside club, they also take Robbie Fowler from Liverpool

Whilst Liverpool go for another of my former players

Anyway the curtain raiser is here and it’s the rather unusual matchup of Leeds vs Southport. Leeds will fancy revenge after the FA Cup final humiliation.

What can you say? Southport win the Charity Shield on pens. All the while, they have a Division 2 campaign to get underway. They’re still in the Cup Winners Cup too, and hold a slight advantage in their second round tie 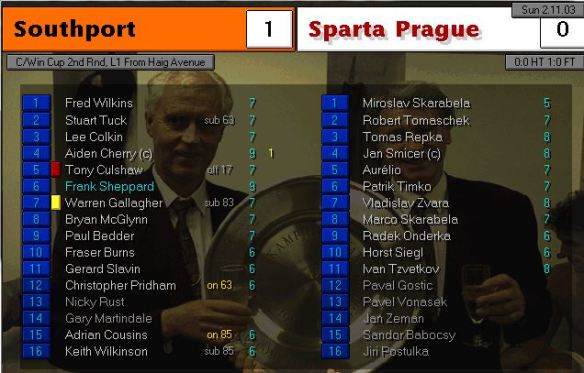 Things are going well for Darlo too, so much so we’re actually 4th. We’re functional rather than brilliant but that’s fine by me. Guillherme, Ayew and Olivero are the stars and if we can finish in the European places, we’re ahead of my target. Good times.

Somebody having less of a good time is Brian Little, who has been sacked.

Something I forgot to mention last time is Newcastle’s plight. After sacking Ince, David Batty came in as player manager and…got them relegated to Division 2. Sitting 19th in Division 2, he’s sacked too.

Smith starts the game as a player at Brighton, but it’s rough time for the Magpies.

Our new found form is underlined by this result

All of which leaves the table looking like this: 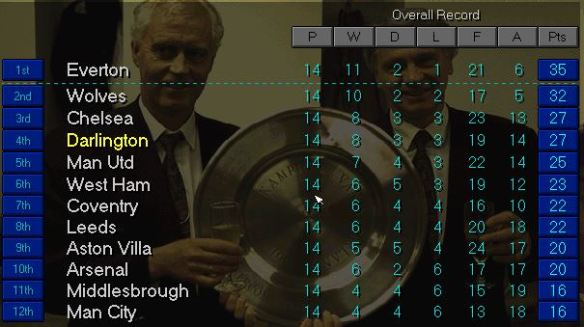 Everton look to get their title back whilst defending champions Leeds are down in 8th. We’re the surprise package up in 4th and I doubt we’ll finish there, but it’s enjoyable so far. Villa sacking Little seems rough with them being 9th.

Meanwhile Liverpool’s plight is the big talking point, big problems for Roy Evans. Anybody from 13th down looks in a fair amount of trouble.

So that brings you up to date with the happenings. It’s been the usual mix of crazy events but I’m hoping we can keep this going. Until next time..