We’ve just about sobered up after guiding Darlington to the Premier League. 3 promotions in 4 seasons have seen the club transformed from a tiny Division 3 club to a tiny Premier League club. But how on earth will a club with a capacity of 7000 cope in the big time? Well, let’s see what 01/02 has in store.

Good news to start with anyway

5000 new seats, what a treat. The ridiculous thing is there are only 10,600 seats, so we still have standing at Darlington in the Premier League in 2001. Thug life.

This is as good as it gets though, it doesn’t take long before it all comes crashing down. Look at this joke:

My goalkeeper, who I signed way back in Division 3, is out of contract. He’s wanted out for a while but to get £575k for him is sad. I can’t stop him as he won’t sign a new contract, so I need to find a goalkeeper and quickly.

Other transfers are actually quite subdued

You can always rely on Sunderland for some stupidity, firstly they sack Keegan following relegation (but wait until the eve of the new season)

Who can they get to replace him? WHO I ASK!?

Well, obviously. Sunderland sit 10th in Division 1 after 18 games, Le Tiss starts himself in every game which perhaps isn’t a surprise. 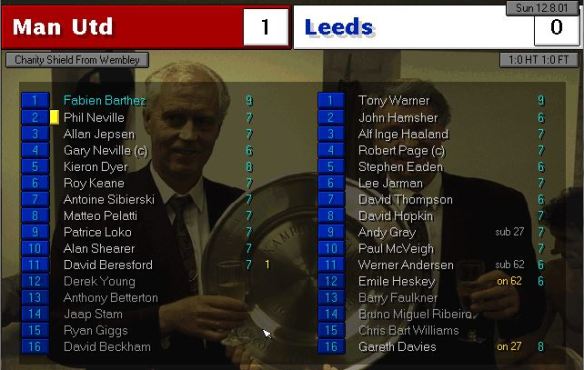 To think I laughed when David Beresford made the move, but winning the Charity Shield will make it all worthwhile.

Italy have been thinking of sacking their manager for a while, but Cesare beats them to it and quits.

Jose Camacho leaves Betis for Real Madrid as they attempt to break the Barcelona dominance. Then again with Neil Finn in goal, they might be waiting a while.

Back at Darlo and I can’t win. We concede loads and score few, it’s a recipe for awfulness. I have a series of terrible goalkeepers to replace Betterton, including blog favourite Steve Simonsen, but I eventually find Carlos Germano who was released by Sunderland following their relegation, so he’s used to it being terrible. He’s also Brazil’s number one, remarkably.

It is actually Germano’s debut as well, just to make me feel even more stupid for not signing him sooner. We actually follow this up with a home win against Villa, and a win over Barnsley in the League Cup puts us in the last 16 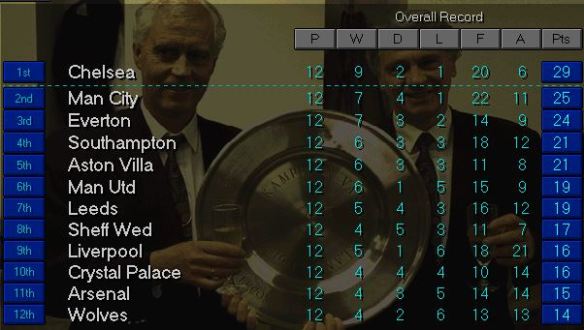 Bryan Robson has really recovered Chelsea, whilst Man City replicate the real life table by taking second. Rather unlike real life, they are managed by Joe Royle and have Dion Dublin up front, but whatever. John Toshack has Everton in 3rd, with enemy number 1 Robbie Keane the star man but he wants a move to a bigger club. No loyalty that kid

The back to back wins do little more than save face, we’re still bottom of the table but just the 4 points from safety. The goals against column is hideous but that’s life, we’ll keep fighting. Hopefully the improvement continues.

So join us next time as we head into the winter months praying for a flurry of goals, but I wouldn’t bet on it.