The third season is underway and after suffering playoff heartbreak at the end of 98/99, can Darlington go one better this time around and get up to Division 1? Likewise, Chelsea threw away the title on the final day of the season, can Vialli get a reaction from his men?

After a mini clear out, I’ve decided the best solution is to feed Sean Devine raw meat and watch him go. I’ve also signed a re-generated Ally McCoist & John Collins, so that should help. Devine has gone mad

Hopefully nobody from the top divisions takes a punt on him. Unfortunately Aberdeen are after another of my youngsters

However Fulham also bid for the centre back, so I don’t lose yet another player North of the border

One of my earliest stars who got picked off has come back to England for nearly £3.5m.

So results have been very good, and we’re actually occupying one of the two automatic spots

Addressing the goalscoring problem has been the most pleasing aspect, but we’ve got to keep it going. There’s yet another derby of a cup tie too, though a little bit more low key than Newcastle

Who do you appoint? Well it’s only the manager who was in charge back in 1984-85

So Jack Charlton opts to drop down a division to try and get Newcastle back in the big time. But who will take the Everton job?

Urgh. Why? Is nothing sacred in this game? Palace appoint Peter Reid who has links to Sunderland and Everton, so it’s basically incest all round. Both Sunderland & Newcastle are in the playoff positions in Division 1.

Anyway, who wants to see some silly signings (admittedly some sillier than others)?

Deane Bullock to Lazio is just an obvious fit, I’m sure you’ll agree. 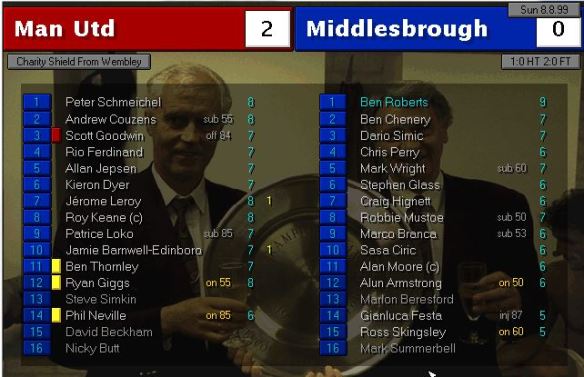 Bit of an understrength Man Utd team but still too much for Boro.

Change of manager at Tottenham

And Gladiators host Josh Fashanu is moving up in the World

All of these shenanigans have left the Premier League looking like this:

Interesting to see Man Utd all the way down in 9th, whilst Roy Evans will fancy his chances of a first title with Fowler & Owen leading the way. But where are Chelsea?

All the way down in 14th! Fash is doing his bit to keep Wimbledon up too.

So it’s all coming together quite nicely for the busy winter, I just hope nobody has Sean Devine on their Christmas shopping list. Until next time…