Welcome to the first update of the 1998/99 season. In season 1, my Darlington side were a model of consistency and took one of the three automatic promotion spots to gain a place in Division 2. Meanwhile at the moneybags end of the scale, Man Utd won the Premier League with 100 points but were beaten late on in everything else. Fergie will not be happy. Let’s proceed.

Firstly at the Darlo end of the scale, I did the obvious thing to celebrate promotion – raid Partick Thistle for all their highly rated youths. This has worked out averagely well. Alex Notman came in from Man Utd on loan and I picked up some promising freebies. I also took a twitter recommendation for Felix Aboagye 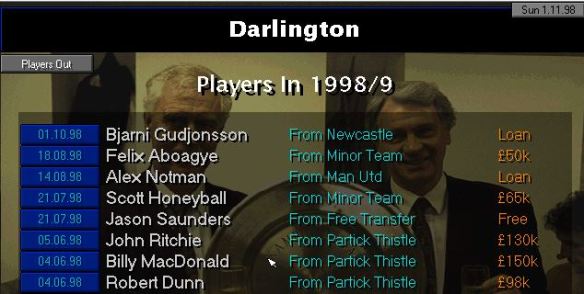 The problem is I’ve actually got too many good players, and I’m not really sure what my best 11 is, which I don’t like. Something else I don’t like is Division 2. Sure, it’s 24 teams like Division 3 but obviously the teams are better and only 3 go up instead of 4. So it’s tougher all round. Devine is still my main source of threat but we’re not as fluid, so we’re 8th at this stage

With the games in hand we should be good value for a playoff place but I need a standout player.

Speaking of which, one of my last standout players is having quite the career

So after less than a season and a half…

Anyway, in the big world, Man Utd are trying to re-create real life

That’s quite formidable. Meanwhile, Sir Kevin of Keegan is back in England

I fancy them to win Division 1 you know.

Charity Shield kicks off the season

Shearer with the armband will please Keane no end. Anyway, they obviously aren’t keen on Ben Thornley being part of the team so they’ve brought in this kid who ripped Division 3 apart with Cambridge, got his big move to…Fulham, and now…

Reid is sacked after Sunderland fail to get promoted (for pretty much the first time ever I think) and actually finish 11th. John Toshack gets the gig.

It’s Chelsa though who top the pile, after finishing last season strongly they’ve continued that form.

Somehow, Dalglish is still in a job. Watch this space.

Join us next time as we move into 99 and all the excitement that comes with it.