Hello and welcome back to The Wonderkids where we continue to attempt to take a rag-tag bunch of players with unlimited potential from Division Three all the way to the top. Most of them may never have a hope in hell of becoming the next Nii Lamptey, John Curtis or David Beckham (yes he’s got unlimited potential whilst Michael Owen…does not) but we’ll see if we can drag the last ounce of potential out of them. You can catch-up with last week here.

Last time out the backbone of Dean ‘Bing’ Chandler had helped carry us to within sniffing distance of the promised land with 13 games to go. Our strikers not quite on fire as before but the goals continue and we’re defensively ‘okay’. Here’s a reminder of the table;

END_OF_DOCUMENT_TOKEN_TO_BE_REPLACED

So we are back for the final conclusion to this outstanding season. At points, it looked probable that we would get promoted without winning the league, which meant managing Brescia for a 3rd season, and possibly more in Serie A. However, things took a turn as Cagliari have lost their amazing form, and have lost a few in a row. The gap is now 4 points, with 9 games remaining. My only wish is that the transfer window was open a lot longer than it has been! Playing with only 1 EU CB was hard work, as I have had to waste a Non EU slot on that position. Our first game is at home to Salernitana, who are flying high in 6th. We just have to match Cagliari or better

END_OF_DOCUMENT_TOKEN_TO_BE_REPLACED

Hello and welcome back to another Monday Night Football after our brief week off for the International weekend. As ever we’ll take (what would have been) some of the weekends Premier League games and give them a CM9798 makeover. For this weekends could have beens, we’ll be going back in time for Saturday’s fixtures to 1997:

And it throws up no level playing fields. The most dramatic differential being Division Three Brighton at home to the class of 92. Let’s see how they get on.

The future double winners stroll into a comfortable lead through the grand sulk and Viera. Not to fade away Norwich get back into it and Bellamy misses a sitter at the death for a real upset.

Wolves almost delivered an upset in the derby but it became one to Froggatt about. Villa cruising home in the last 6 minutes.

Newcastle struggle to turn over much weaker opposition (sound familiar???) with Shearer out injured. Andersson and Rush put an end to Eddie’s hopes as we wonder Howe they didn’t get beat by more after facing 28 shots.

The biggest divide in the fixtures and boy does it show…well, at least for 32 minutes anyway. The second half was all Brighton, but they couldn’t find a way through the big Dane.

Stan always said when he arrived in Burnley that Waddle had assembled a shambles of a squad, and the display from Chris Woods would suggest it (a 4 at half-time). Palace cruised home here with no threat at all.

Spurs controlled the game from start to finish, and its unsurprising that Klinsmann fires them home. Saunders was shocking and ineffective for Utd.

The gift that keeps on giving. Noel-Williams has a house party to celebrate a fine display as the Dell Boys are rolled over and tickled. There’s ALWAYS a shock result in CM9798. Perhaps Watford could be a good save if you can keep the squad together?

And that’s a wrap on another special edition of Monday Night Football. I hope you have enjoyed our spin on the fixtures and maybe gave you thoughts for a #cm9798challenge. We’ll be taking a break next week but we’ll be sure to see you again soon.

Welcome back! Last time out I took desperate measures to try and save the Retirement Home by signing three players under the age of 35 to care and nurture our old lads. Even with help, we’ve won FOUR out of 29, so you can’t convince me I made the wrong decision. Here’s where we re-join the action as we try to mount a great escape. 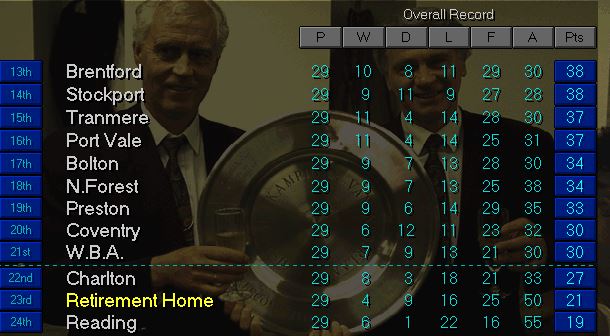 END_OF_DOCUMENT_TOKEN_TO_BE_REPLACED

Greetings friends of the champ man universe, and welcome to my second blog. I hope you all enjoyed the first season of Basque Boys for Life, and while Guerrero and co are off on their end of season holidays for some much-needed rest and recuperation, it’s time for a new adventure.

We all love CM97/98 – this is a fact, as Rafa Benitez would say, and it will always be my favourite game in the CM series, but since being a part of the great community we have on Twitter, I’ve noticed that CM01/02 is also still very popular and has a massive following.

One of many things I love about CM97/98 are the players who had much better careers on the game than they did in real life, the cult heroes if you will. This is what lead me to create the Icons series, and CM01/02 is no different with its own group of legends who were fantastic on the game but never quite matched it in reality.

END_OF_DOCUMENT_TOKEN_TO_BE_REPLACED

In the absence of real football, Ross is looking to win a first Premier League title for Liverpool. It’s going quite well – catch up with last week here and then read on…

Well the last update ended on a good note, we are top of the Premier League and in the latter stages of the UEFA and League Cup so what could go wrong? Let’s find out together.

Back at Anfield for the visit of Coventry and its a routine 3-1 victory. Owen scores after 2 minutes and we are that comfortable i decide to make 3 changes at HT. Viktor Onopko then gets himself injured, he does seem to do that a lot but thankfully we see the game out easy enough.

The FA Cup could be a good source of more silverware this season and we face off against everyone’s favourite Millwall in the 3rd round. I ring the changes to give the back ups a game and we are 4-0 up at HT. It finishes 5-0, well and truly job done.

From one cup to another and it’s Bury in the League cup quarter final its starts badly when captain and England(!) international Dom Matteo is sent off after 20 mins then 5 mins later top scorer and assist maker Owen is injured. Bury then get a penalty and go ahead 1-0 at HT. McManaman levels it up before Emmers gets a second yellow and joins Dom in the bath. Nothing happens in extra time and we then lose on penalties after Fowler and Leonhardsen both miss. This feels like a turning point and not in a good way.

It’s back to the real business of the league, injuries and suspensions are starting to bite as we are down to the bare bones. We strike late through Fowler but Gayle strikes even later and its 2 points dropped.

The games keep coming as Spurs rock up at Anfield and we play out a ding dong battle which we ultimately win 4-2 but pick up another injury and it’s Robert Page’s turn this week.

FA Cup is the name of the day and we take on the might of Charlton, Owen opens the scoring after 2 mins, Fowler adds a second after half hour and Robbie Keane fulfills a boyhood dream to play for Liverpool from the bench for the second half. He does nothing but a 3-1 win sees us through.

Back to EPL action as we take on Leicester for what feels like the 4th time this season, 1-0 win easy.

A 2-1 away loss to Blackburn puts the skids on our decent run and without looking I already know Man U have gone another weekend without dropping any points. We fall to second.

Swindon away in the FA Cup doesn’t prove too tricky and a comfortable 3-0 win is secured thanks to Emmers, Page and Owen. A young Argentinian by the name of Riquelme makes his debut as well.

Unfortunately, we miss the chance to go top of the league after Man U can only draw with Villa we manage a 0-0 draw with Chelsea and honestly it could of been much worse they battered our goal the entire game.

Bolton make things very easy for us by getting two players sent off inside ten minutes. It doesn’t take long for Owen and Fowler to take advantage as we ease to a simple 4-0 win.

Finally for this week then is the return of the UEFA Cup, we drew Lazio which is going to be tricky they’ve got a solid squad but thanks to goals from Owen and Riedle we take a 2-0 lead to Rome for the second leg.

So to round up this week we are out of the league cup thanks to Bury who coincidentally also beat Arsenal in the Semi Finals! We are second in the league, 3 points off Man U and still in the FA and UEFA cups. Could be worse I guess. Until next week.

Did you hear Ross on Champ Man on the Post episode 3 yet? Listen now!

The Wonderkids are back on the trail seeing whether minus potential stats are enough to drag a team kicking and screaming into the elite competitions of CM9798. There have been a few small additions to the squad on the way as we look to see if they can kick-on in Division One. Catch up with last week here.

Last time out we signed up Rowdy Rody Turpijn to add to our contingent of Dutch minus men. We continue to make steady progress, but the playing field is much more level than the last season with last season’s FA Cup finalists Huddersfield amongst the chasing pack. The second-string strikers are not firing at all and we are more reliant on a close group of key players.

END_OF_DOCUMENT_TOKEN_TO_BE_REPLACED

My Tweets
CM 97/98
Create a free website or blog at WordPress.com.